Scotch Lamb PGI, is set to be top of the menu in the coming weeks as Quality Meat Scotland’s (QMS)  “Scotch Lamb, Naturally” marketing and PR campaign makes a return. 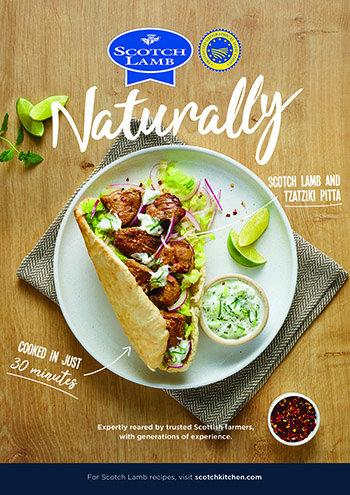 The six-week campaign, which will officially launch on Monday 23rd September, is set to reach 4 million Scottish adults and seeks to inspire consumers to consider Scotch Lamb as a healthy and quick midweek dinner that all the family can enjoy.

For the first time ever, QMS is running an on-pack promotion to support the campaign. The competition will appear on all packs of Scotch Lamb for sale in Tesco, Coop, Aldi, Lidl and Morrisons, including Morrisons’ in-store butchers counters, throughout Scotland as well as members of the Scotch Butchers Club.  The competition offers shoppers the chance to win a world class dining experience and mini-break to Skye by visiting www.scotchlambcomp.com and entering a unique code.

The campaign will also see the return of The Scotch Lamb, Naturally advert to TV screens as well as press, digital, billboards and social media advertising along with public relations and influencer activity.  Shoppers at Morrisons will also have the opportunity to sample some quality Scotch Lamb in store as well as receiving recipe cards full of inspiring dishes which can easily be created during the working week.

Kirsty Fox, marketing manager for Quality Meat Scotland, said: “The Scotch Lamb PGI campaign will give consumers across Scotland some fantastic mid-week inspiration for recipes that will help them break out of a mealtime rut with delicious dishes that are quick and easy to make.

“Scotch Lamb is a fantastic ingredient that is often overlooked in favour of other meats and we want to put Scotch Lamb back on the menu by showing consumers how simple it is to cook and how delicious it is.”

Scotch Lamb, Naturally coincides with QMS’s search to find the country’s top Scotch Lamb butchers and chefs. Any butcher who stocks Scotch Lamb is being encouraged to enter their most original and delicious Scotch Lamb products, from marinated cuts to burgers and sausages, pies, and ready meals. Scotch Butchers Club members who serve lamb will also receive point of sale kits featuring a bespoke lamb guide and promotional assets.

Chefs are encouraged to participate in the Scotch Lamb PGI Surf ‘n’ Turf Chef of the Year competition, which is open to members of Quality Meat Scotland’s Scotch Beef Club and/or members of the Scottish Chefs Federation.

Scotch Lamb champions who are working in the Scottish sheep industry or in supporting businesses, have also been lined up ready to support the campaign and help drive home the versatility, quality and taste message which underpins the campaign to consumers up and down the country.