A ‘Ham Passion Tour’ project, which has been allocated almost 6 million Euros, has exceeded the targets to promote and leverage Iberian Ham by 165%, and has registered more than 50 million hits on European media. 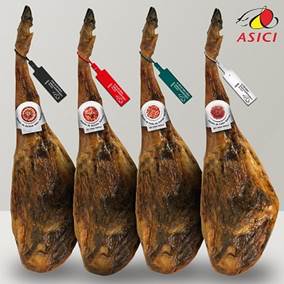 The Inter-professional Association of the Iberian Pig (ASICI) launched the programme, co-financed by the European Union and the sector itself, to give international visibility to the Iberian Hams of Spain.

The identification system with seals “Choose your colour, choose your Ibérico”, ÍTACA and the “Ibérico” APP have been a revolution in terms of informing consumers about the traceability of the end product.

The internationalisation and export of Iberian products has gone from being simply an option to becoming one of the main challenges of the sector. ASICI, the Inter-professional Association of the Iberian Pig, is said to have been working for several years to increase the knowledge, recognition and positioning of the Iberian Hams of Spain in the international market.

As a result of this work, the ‘Ham Passion Tour’ emerged a year ago. The main goals of the campaign, with a budget close to 6 million Euros co-financed by the European Union and the sector itself, is to increase competitiveness in France, Germany, United Kingdom, Spain and Mexico, and the visibility of the traditional production system and the benefits of one of the star products of Spanish cuisine and the Mediterranean diet, Iberian Ham.

Up until 2020, the #HamPassionTour will travel on board a ‘Ham Truck’ to 24 European cities in France, Germany, United Kingdom and Spain.

In the first year of the campaign alone, more than 265 million potential consumers have been reached, achieving more than 50 million hits in the European press, exceeding the originally established targets by more than 165%.

“We have to convey the idea that Iberian Ham is much more than just a food, it’s tradition, quality, food safety, traceability and sustainability. It’s the balance between respect for the environment and the sustainable exploitation of natural resources.  A true example of good work done that needs to be communicated and transformed into added value for European products”, stressed the chairman of the Inter-professional Association of the Iberian Pig (ASICI), Antonio Prieto. “We want to promote the recognition and distinction of Iberian Hams, incorporate that cultural and social touch to the product, showcasing the art of cutting and exploring ways to connect with new emerging consumers such as ‘millennials’ and ‘foodies’”, he added.