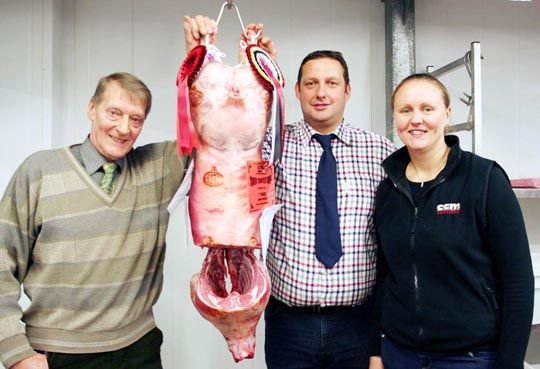 Mr Cropper, who runs his shop in Accrington Market with his daughter Clare, paid £420 per head, the day’s top price by far, for the title-winning pen of three 36kg Beltex-cross prime lambs from the Brown farming family in Newton-le-Willows, Bedale.

Mr Cropper also acted as judge for the same day’s standalone lamb carcase competition, before swooping to land his chosen champion, another Beltex from Robert Garth and Kelly Armitage, of Bentham. He again paid the day’s top price of £300.

Also the purchaser of last year’s title-winning lamb carcase, Mr Cropper made a further successful bid of £150 at the latest renewal for another first prize carcase from local vendor Michael Hall, of Airton, Skipton.

The prize-winning lamb carcases are now on sale in Accrington Market Hall, with the champion prime lambs due to be sold in the run-up to Christmas.