The Scottish pig industry has been given a major boost following a move by Asda, to reinstate the Specially Selected Pork label approved by Scottish SPCA on its shelves. 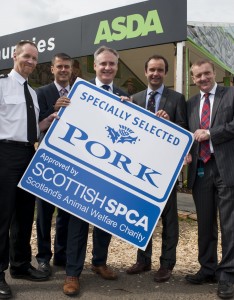 The Specially Selected Pork label approved by the Scottish SPCA highlights the high welfare standard of pigs on Scottish farms. Asda was quick off the mark to stock pork products bearing the label when it was launched almost four years ago.

The closure of Asda’s previous supplier, Halls of Broxburn, resulted in stocks of Specially Selected Pork labelled being temporarily off the shelves of the retail giant.

However, Asda pigmeat supplier, Cranswick Country Foods, is now working with Dunbia Elgin, which has increased its slaughter throughput to ensure Asda’s 57 Scottish stores can be supplied with the Scottish SPCA-approved product.

Pig farms throughout Scotland are visited by Scottish SPCA inspectors as part of the ground-breaking initiative behind the label. The initiative was the UK’s first farm assurance and food labeling scheme independently approved by a national animal welfare charity.

Participation is voluntary and around 98% of total Scottish pig production has now been inspected by the Scottish SPCA.

Rural Affairs Secretary Richard Lochhead said: “This is a timely boost to the pig industry in Scotland and demonstrates that our producers adhere to the highest standards of animal welfare while producing top quality pork. The scheme is a further reminder of Scotland’s first class standards from farm to fork.

“It is important that consumers can purchase the finest possible pork and the Asda Specially Selected Pork label offers them that reassurance on the origin that they expect after the horse meat scandal.

“The scheme also delivers real benefits to our valued pig sector guaranteeing the quality and provenance of Scottish pork, the high welfare standards that are in place, and using a supply chain which supports the industry at a local and national level.”

Asda’s head of sustainable sourcing, Dr Chris Brown, said: “We are delighted to be in a position to reinstate the brand, which is the UK’s first farm assurance and labelling scheme approved by a national animal welfare charity.

“Scotland’s livestock farmers are in a class of their own when it comes to producing top quality products at the highest welfare standards, and we know our customers want to see it on Asda shelves. Thanks to our new contract with Dunbia Elgin, we’re able to maintain our commitment to offering Specially Selected Pork in all of our Scottish stores.

“Asda has been working hard to support the Scottish pig industry over the years and this partnership is another great example of collaboration in the supply chain.”