Many of the UK’s most celebrated chefs took time away from their hectic kitchen schedules to join fellow distinguished restaurateurs and guests for Aubrey Allen’s 80th anniversary recent commemorative lunch. 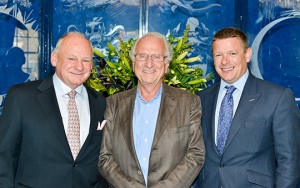 The event, held at The Butchers Hall, highlighted yet another landmark occasion for the Coventry based butcher, which has witnessed unprecedented success this year with the granting of the Royal Warrant to HM The Queen as suppliers of meat, poultry and game.

Michel Roux Snr, the celebrated Michelin Star chef from the Waterside Inn at Bray proposed a special vote of thanks to Aubrey Allen on behalf of the guests, which included such culinary personalities as Brian Turner, Chris Galvin, Andreas Antona and Daniel Galmiche.

Commenting, Michel Roux the French born chef and restaurateur said: “My own father and grandfather owned a charcuterie shop in France and it is just wonderful to witness the similar skills and knowledge that have been passed down the family generations at Aubrey Allen.

“This is also my opportunity on behalf of the restaurant industry to thank you for consistently providing the best of the best meat and meat products available to us. Congratulations on being the Chef’s Butcher for 80 years!”

Russell Allen, managing director of Aubrey Allen and the founder’s grandson remarked that celebrating 80 years in business was a very special landmark for Aubrey Allen, which started in 1933 from the humble beginnings of a small butcher’s shop in Coventry.

As he explained: “Today we are a third generation family business with a significant turnover supplying meat and quality fine foods across the hospitality spectrum, as well as to retail customers online and from our Butcher’s Shop of the Year in Leamington Spa. We also have a highly successful events catering business, as well as our own bistro restaurant.

“Sadly the most important person behind our business is no longer with us, my grandfather, Aubrey Allen, who passed away in 2008 and would have loved to have joined in all the celebrations. But the legacy he created and passed down to me and my sisters Debbie and Lucianne, via our father Peter, is set to continue, and we are all focused and looking forward to celebrating our centenary in 20 years’ time”, he added.

Guests were treated to one of Aubrey Allen’s signature beef dishes for the main course, a traditional British roast striploin of beef, sponsored by MLCSL, which was preceded by prawn cocktail and followed by strawberry tart. Moet & Chandon supplied the champagne, a Ruinart Blanc de Blancs, and Fromage to Age supplied the cheese course.

Plans for the continued success and expansion of Aubrey Allen’s business are already on the horizon, following its recent acquisition of an established cheese supplier in Gloucestershire. This latest deal has also triggered a significant investment into the extension and development of its headquarters facility.