As Bacon Connoisseurs’ Week – the seven-day celebration of Quality Assured Bacon – is underway, the nation’s best rashers have been unveiled. 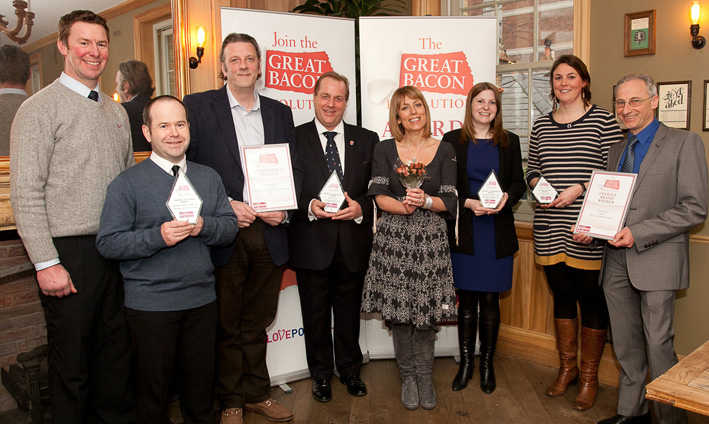 Shortlisted retailers, butchers and bacon producers gathered at a special event in London to find out which bacon, from over 300 entries, was to be named sector champions.

Branded
Denhay Farms for its Dry Cured Smoked Back Bacon

For Cranswick ‘Old is the new New’ with their Morrisons bacon cured to an Old English recipe. With juniper, cloves, muscavado sugar and a hint of black pepper the bacon, which is part of the ‘Signature Range’, has a distinctive flavour. Fiona Jones, Cranswick category manager, said: “Dry cured bacon is definitely back in fashion. We use traditional methods, including hand-curing and air drying, and this combined with quality ingredients sets us apart. The award is fantastic recognition for our NPD team.”

Quality and tradition also proved to be a winning combination for Cheshire’s Cheerbrook Quality Farm Food. Their ‘Traditional Dry Cured Back Bacon’ is made from free range pork, which is then rubbed with traditional dry salts. Owner Andrew Shufflebotham said: “This award is testament to our butchers and their attention to detail. We mostly produce smoked bacon but have been spurred into curing our own and thanks to this award will continue to do so. We sell a lot of bacon, both individually and used within other products, which means every week is like Bacon Week for us!”

In the catering sector, a hint of sweet chilli introduced towards the end of the brining process produces bacon that truly stands out from the crowd for Midland Bacon. Steve Hind, development director, said: “We know sweet chilli is a popular flavour with diners and decided to match it to our quality bacon to prove that it isn’t just for breakfast. The combination works incredibly well – as the awards testify – and as we process the whole back, this bacon can be cut into steaks or rashers, making it ideal for brunch, lunch or an evening meal.”

Finally, leading the brands was Denhay Farms with their Dry Cured Back Bacon, which is naturally smoked over beechwood to produce a surprisingly subtle yet wonderful flavour. The bacon is sold in Waitrose, Ocado and through 120 Sainsbury’s stores, as well as being used in Eat 17 Bacon Jam and Burts Potato Chips among other products.

Marketing manager, Ellen Streatfeild, said: “We’re incredibly passionate about our bacon, so were thrilled to receive the Bacon Revolution Award. We’ve been making this bacon for a number of years but its popularity has grown recently, as it is a great all-rounder. Our customers can also be assured that it comes from British, outdoor-bred pork and is ‘Freedom Food’ accredited.”

BPEX’s butchery and product development manager, who led the awards judging, said: “All of the finalists had fantastic products that really demonstrated the superb standard of bacon production today and they thoroughly deserve their awards. What the winners had in common is the use of quality pork combined with skilled curing and smoking methods to produce bacon that not only tastes magnificent but can be enjoyed across many dishes.”

“These awards, coupled with key messaging from Bacon Connoisseurs’ Week, will show the nation that our mealtimes deserve quality assured bacon and that there is a wealth of traditional, innovative and above all, great tasting varieties to choose from.”

Fay Ripley said: “I love cooking with bacon as it is such a versatile ingredient; it is far more than a breakfast favourite! There is such a choice when it comes to picking great bacon, whether you shop at your local butchers or at the supermarket – something these awards really prove.”

Bacon Connoisseurs’ Week will run until 24th March, to raise awareness for quality bacon and encourage people to look for marks of assurance, such as the Red Tractor logo, when shopping and eating out. It is supported by industry-wide activity and a high profile national PR campaign.