The Butchers’ and Drovers’ Charitable Institution (BDCI) is proposing to change its structure for the first time since it was established in 1828. An Extraordinary General Meeting of the BDCI to formally endorse the structure, will be held at 2pm on 23rd January 2013 at Butchers’ Hall, London.

BDCI honarary treasurer, Edward Hoefling, explained: “At present the BDCI is an unincorporated association. This is a format which was common when the charity was formed. However with considerable changes in society and legal formats since inception, it is now necessary to convert to a limited company structure. 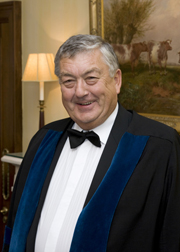 BDCI president, Richard Cracknell said: “To all intents and purposes there will be no change to the way in which it functions, however, we are proposing to extend the geographical definition of the charity to include meat industry personnel based in Eire.”

“Suitable legal advice has been taken and the trustees of the institution are satisfied that the change is in the best interests of the charity. The present trustees will become the members of the new organisation and the charitable activities will remain business as usual.”

BDCI president, Richard Cracknell, said: “The move to a new structure is a very positive one for the BDCI. To all intents and purposes there will be no change to the way in which it functions, however, we are proposing to extend the geographical definition of the charity to include meat industry personnel based in Eire. This is largely to acknowledge the valuable contribution to the BDCI of the Irish meat trade as a whole and also in recognition of Beatrice Blake during her time as festival chairman last year and the support given to her by Bord Bia.”

Anyone wishing to attend the EGM meeting should contact the BDCI on 01727 896094 or via e-mail info@bdci.uk.com