British Sausage Week (4th-10th November) celebrations got underway as celebrity chef and British Sausage Week ambassador, Simon Rimmer, took to the stage to announce the winners of the multiple retailer/branded manufacturer category in the competition to discover ‘Britain’s Greatest Sausages’. 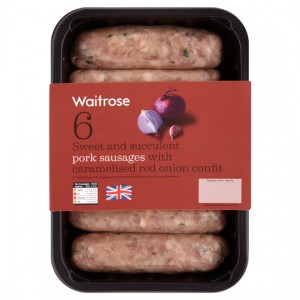 The presentation ceremony, held at Smiths in Old Spitalfields Market, London, marks the start of a nationwide tour to discover some of Britain’s best sausages.

After two rounds of intense judging by a team of leading industry experts, five supermarket sausages made it through to the final.

Retail Gold Award
Waitrose (supplied by Walkers Midshires) scooped the top award for its innovative ‘6 Sweet and Succulent Pork Sausages with Caramelised Red Onion Confit’ when they were awarded with the hotly contested ‘Retail Gold Banger Award’ after scoring highly on taste, texture and appearance.

BPEX butchery and product development manager, Keith Fisher, said: “The standard of quality pork sausages entered into the multiple retail category this year was superb; the judges had an extremely tough task on their hands – so being in the top five is a fantastic achievement.

“We’re delighted to have Simon with us to kick start the British Sausage Week celebrations and award our worthy champions their Banger Awards. He has also been sampling some of the winning sausages at our pop-up shop in Old Spitalfields Market, which is showcasing all the regional finalist’s sausages as well as the multiple retailers. He will then take to the road on a nationwide tour to discover even more superb sausages. The week presents an ideal platform for retailers, sausage manufacturers and butchers to showcase their quality pork sausages.”