BPC chief executive Peter Bradnock announced he would retire this summer after more than 20 years with the British poultry industry.

Mr Bradnock joined the BPC in 1991 from a New Zealand civil service background specialising in international and EU agricultural trade policy with postings in Brussels and Rome. 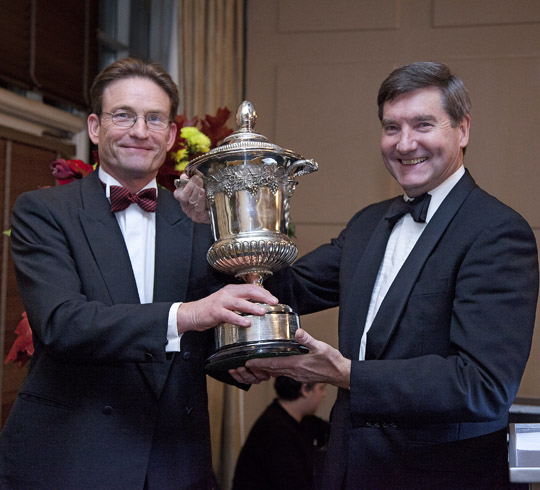 Peter Bradnock (right) to retire after 20 years in the poultry industry. He is pictured here receiving his poultryman of the year award from BPC chairman, John Reed.

BPC chairman John Reed said: “Peter’s expertise and dedication made him an outstanding ambassador for British poultry. Under his leadership, the British Poultry Council made its positions front-and-centre at all times and became a strong partner for ministers, government agencies and the agri-food industry. In addition to his unique contributions to the British industry, he was also instrumental to international poultry bodies at European and global level. The poultry sector is very grateful for his years of service.”

The position will be filled by Mr Andrew Large from the Cleaning and Support Services Association. Mr Large’s background includes spells in the civil service (in London and Brussels), industry, Corus and BOC Group and Trade Bodies, Federation of Master Builders (FMB).

John Reed said: “I’m very pleased to welcome Andrew to the British poultry industry. With his wide experience he has a lot to bring to the benefit to the BPC.”

Mr Large is expected to join BPC this summer.