British Turkey has launched its fourth Student Chef Competition that invites Level 2 and 3 catering students to develop a starter and main course using British turkey thigh or breast meat that could be served at the annual industry awards banquet held in September 2014 to over 280 guests.

The prize includes £400 of catering vouchers, plus the chance to work at the awards venue preparing the dishes. 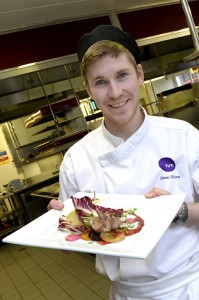 Paul Kelly, chairman of the British Turkey Federation said: “This is a fantastic opportunity for student chefs to develop a menu that could be served to the industry movers and shakers at the annual awards dinner in September 2014. Turkey is a versatile protein that can be served all year round and is a fantastic flavour carrier. We are extremely excited to be continuing our student chef activity and look forward to seeing some delicious dishes being entered.”

All year 2 and 3 catering students are eligible to enter the competition. Students can also book a two- hour turkey workshop at their college from October 2013 – February 2014 including a talk from a turkey farmer and cookery demo by a chef. E-mail info@britishturkey.co.uk for further details.

The 2013 winners included Sean Nolan from Hertford College (pictured) who devised a starter of Warm salad of slow cooked thigh, lollipop, beetroot, prosciutto & cranberry cream cheese and Daniel Draper of Westminster Kingsway who developed the main course of Stuffed turkey breast and a dark turkey meat baklava served with a sweet potato puree, char grilled green beans and a sherry jus. Both students will spend two days at The Savoy in September 2013 preparing the dishes for guests.