A new wholesale foodservice company has been launched in the South West this month by a Cornish butcher. 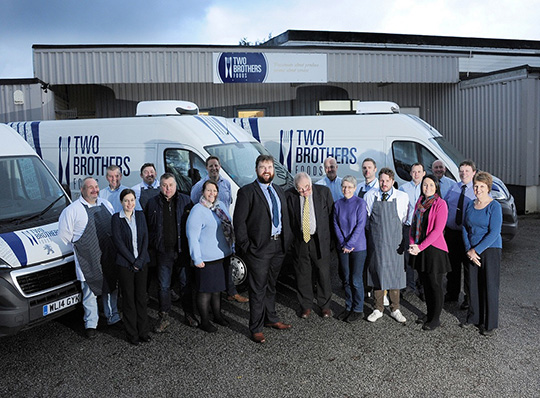 Director Gavin Roberts and the Two Brothers team at the distribution hub near Newquay.

Two Brothers Foods is the new venture from Gavin Roberts of Kernow Sausages; an enterprising Cornish butcher who made his name using the finest cuts of pork to create a range of sausages based on family recipes.

Kernow Sausages was launched in 2007 and in 2014, Gavin successfully purchased Vealls, a food wholesaler based in Newquay, in order to grow his business in new and exciting directions.

Vealls was founded in 1964 by brothers Ron and John Veall, who increased their market share to a turnover of £1 million plus, supplying more than 200 businesses in the South West with a range of chilled, ambient and frozen foods.

Gavin is now relaunching the company as Two Brothers Foods – a nod to the former owners – with a reinvigorated offering designed to appeal to professional kitchens across the South West and beyond.

Gavin explains the ethos behind the launch:”Our aim at Two Brothers Foods is to deliver the finest, freshest seasonal foods and niche products – picked, prepped, packed and delivered with great service standards to the kitchen doors of chefs across the West Country.”