Scottish butchers have been battling it out to win a brand new award for Scotland’s top premium sausage developed as part of Quality Meat Scotland’s activities to support higher quality processed meat products. 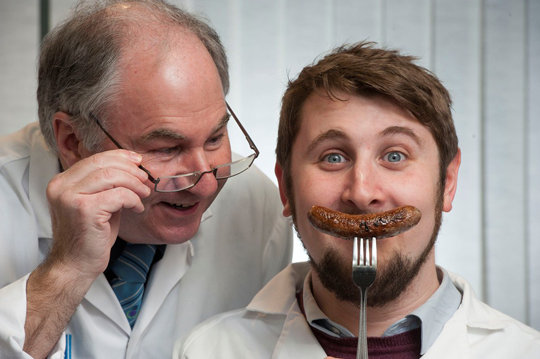 Sausages to smile about! Douglas Scott, chief executive of the Scottish Federation of Meat Traders Association (left), pictured with Jack Broussine of Quality Meat Scotland, and one of the top quality entries.

Lucky judges at ‘Craft Butchers Premium Sausage Awards’ sampled more than 100 of the country’s finest sausages from butchers around the country. The entries were assessed for their performance under a range of criteria including: taste and flavour; palatability; appearance; texture; and general appeal.

Premium sausages are defined as sausages with a meat content of more than 72%. Premium beef sausages are required to be made from a minimum of 85% visual lean meat and pork sausages, 80% lean meat.

The vast range of innovative sausages tempting the judges and showcasing the creativity of Scottish butchers included ingredient combinations such as pork and Dundee marmalade, pork, sweet chilli and lime, and pork and toffee apple. The line-up of beef sausages included beef, cheese and jalapeno, beef with Dijon mustard and beef, tomato and mozzarella.

The winners of the judging will remain under wraps until they are announced at the Scottish Meat Trade Fair in Perth on Sunday 12th May.

Jack Broussine, marketing executive with Quality Meat Scotland, explained the background to the new awards: “Many butchers have responded to requests from their customers for higher meat content sausages and we feel they deserve recognition for their innovation and product development,” said Broussine.

A recent survey of butchers by QMS revealed 92% of butchers’ shops experienced increased footfall in February (23rd January – 23rd February) following the media coverage of the horsemeat issue. Additionally, 95% said customers have been taking a greater interest in the source of meat.

Douglas Scott,chief executive of the Scottish Meat Traders Association, welcomed the fact that more and more consumers are discovering the creativity and innovation to be found inside their local butchers’ shop: “Butchers are keen to ensure their new customers continue to shop with them and the fantastic range of top quality sausages put forward by butchers for today’s event sends out a very positive message about the combination of knowledge, traditional skills and innovation offered by our butchers.”