Raising money for Hire A Hero, Team Army, the Ray Gravell Trust and Walk on Wales, Nigel will embark on his Butchers Bike Challenge from 18th to 30th August.

Taken under the wing of a local butcher when he was a young teenager, Nigel showed great promise winning a number of butchery awards, including the Royal Welsh Show. It is this background that led to the Butchers Bike Challenge. 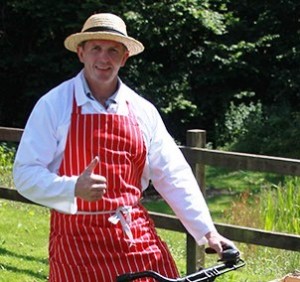 All four charities are lending their resources to the challenge, and Nigel can look forward to support from the Queen’s piper, a number of commando units, a military wives choir, and a number of sports personalities – particularly from the world of rugby.

Bear Grylls, a friend of Nigel’s, said: “This is going to be a tough challenge but that is Nigel through and through – determined to help those who most need it and to do it the hard way and with a smile to the world.”

The public is encouraged to turn up and support Nigel along his route, which can be tracked via his website: www.butchersbikechallenge.org.uk.