Responding to the launch of the Defra consultation on the future CAP, NFU President Peter Kendall today said: “Over the past two years the future CAP debate has dragged on at the European level, but today’s announcement is a critical step forward in how that policy will be applied here in England. 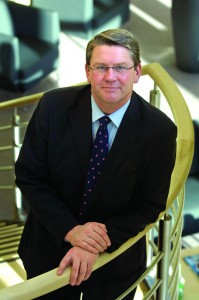 NFU president, Peter Kendal: ” I have repeatedly stated that English farmers are already significantly disadvantaged in comparison with their near neighbours in the EU.”

“We have consulted widely with NFU members over the past year to hear directly how they want to see the new policy implemented. It is clear that nobody is happy with this round of CAP reform. There are unnecessary complications and financial pain ahead but it’s in everyone’s interest to try to find workable solutions to those issues.

“On the back of a horrific farming year in 2012, confirmation that farm business income is down 32 per cent underlines the importance of the CAP to farm businesses. Many elements of today’s consultation will directly impact on farm businesses and their bottom line in the future.

“We will study the consultation and accompanying impact assessment closely, but I am sure that a key element of concerns for my members will be the comments that transferring the maximum amount of money from pillar 1 to pillar 2 is the right thing to do. I have repeatedly stated that English farmers are already significantly disadvantaged in comparison with their near neighbours in the EU. I will hold the Government to its word that they will only modulate the maximum 15 per cent if it can demonstrate it would deliver worthwhile and valuable outcomes for farming and society.

“We know that new schemes take time to design and make operational and we therefore believe that it would be much more appropriate to make use of the flexibility available to government to implement a two staged approach to future modulation rates, if additional funds are required.

“Based on our own internal calculation we believe that Government could afford to levy modulation at no more than nine per cent initially and then this would continue to finance half of the Entry Level Scheme (ELS) and maintain everything else at currently levels in the RDPE. We know that 66 per cent of the existing ELS agreements are expiring in the next two years, those remaining will be affected by the greening rules coming into effect from January 1 2015 and that the scheme has now closed to new applicants.

“In the meantime farmers continue to see nine per cent modulation taken off their Single Farm Payments, but we also know that the next agri-environmental scheme will not be operation until January 1 2016 with payments not being made until autumn of 2016 at the earliest.

“Government will be simply creating a war chest of modulated funds, which could disappear out of the farming industry if it modulates at 15 per cent from next year.

“By taking advantage of a potential staged approach to modulation rates, the Government can pragmatically assess how much of the old ELS measures have been retained by greening and also evaluate the longer term demands of the new agri-environment schemes. Only when this assessment has been made should we consider whether higher modulation rates are desirable.

“For the majority of farmers, today’s confirmation that Defra will follow the broad EU approach as opposed to introducing a more demanding form of greening through a national certification scheme will be very good news. However it is disappointing that Defra looks like it will close the door on giving flexibility to farmers troubled by the requirement to grow three different crops on arable land. The NFU is not ready to give up on that yet. I have requested an urgent meeting with the European Commission to discuss what alternatives there could be and hope we can find solutions before the end of this consultation.

“Elsewhere in today’s announcement, I am very pleased that Defra has listened to the NFU on how to deal with payment entitlements. Rather than maintaining uncertainty among farmers the Secretary of State has today announced that he will roll on the existing payment entitlements which is directly in line with what NFU members have been calling for.”