Home » Competitions » Carve out your career at butchery competition

Time is running out to register for one of the biggest butchery competitions in the UK. Hybu Cig Cymru- Meat Promotion Wales (HCC) is once again supporting a competition set to accelerate the careers of young people in the butchery industry and is encouraging entries from across the nation ahead of the April 2nd closing date. 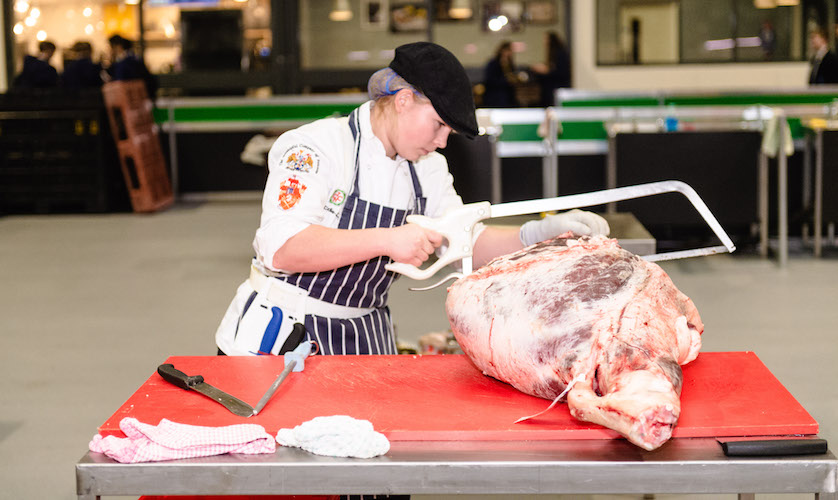 The butchery contest is one of more than 70 key skills to feature in an overarching competition hosted by Worldskills UK with heats taking place later in the year.

Arranged by Welshpool-based training provider Cambrian Training, the butchery contest is well established and attracts entrants the length and breadth of the UK. Wales is no stranger to success in the event with eight finalists from Wales over the last five years and five of them securing a podium finish.

Kirstie Jones, market development officer of HCC said of the competition: “Future generations of young butchers get the chance to showcase their skills under the watchful eye of industry experts. The confidence they can gain from competing in such a prestigious event will stand them in good stead as they start to forge their own paths in the industry.

“HCC is proud to once again sponsor the event and encourages all young butchers from across the whole of Wales to take up the challenge and enter today.”

Liam Lewis, who took home the silver prize in 2019, said of the achievement: “Taking part in the competition was a really great experience. It showed me that I had the skills and knowledge to succeed and it stoked a fire in me to push myself further.”

The finalists completed five tasks over two days in front of a live audience, which tested their skills to the limit. In the final task the butchers were each given a top and rump of beef and they had one hour to bone and trim it, one hour to seam the meat and one hour to make and display products.

Liam said of the task, “It was a huge challenge to get the display finished in time, but we were all in the same boat and we produced some amazing products. We all got on really well and the camaraderie was great.”

The competition in 2019 also featured its first female competitors with Codie-Jo Carr of County Armagh, Northern Ireland, impressing the judges with her skills and focus at the tender age of just 17. She commented, “Competing has boosted my confidence and I think I have developed since the competition. My aim this year is to learn more skills and to do better.

“I enjoyed the competition very much and learned so much from the other finalists and their displays,” said Codie-Jo. “The whole experience of competing at the NEC was amazing and the final was full on, a big adrenalin rush.”

Male and female butchers from across Wales still have time to enter the Worldskills UK butchery competition and put their skills to the test.

Online registration is now open and closes on April 2nd with heats taking place later in the year. To read more about the competition visit the Butchery WorldSkills Competition page.