Scottish farmgate cattle prices increased by around 7p -10p per kg deadweight over the past month reflecting the current strength in the GB cattle market, according to the latest analysis by Quality Meat Scotland (QMS). 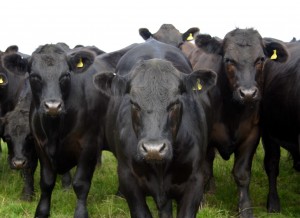 According to QMS: “It seems likely then that Scottish and GB cattle finishers are benefiting from the multiple retailers’ commitments to British beef made at the time of the horsemeat debacle.”

The volume of cattle reaching price reporting abattoirs has increased at the same time as the price rise and these trends have also been seen in England and Wales where, if anything, the price rise has been slightly higher.

“It does appear, however, that different factors are at play in the GB market compared with elsewhere in Europe,” said Stuart Ashworth, Head of Economics Services, QMS.

“Producer prices in the Republic of Ireland and France, for example, have fallen by four per cent over the past month, while across the EU as a whole prices have stagnated.

“Irish prime stock supplies have been running 6 – 8% higher than last year during September and almost one-quarter higher than August this year so the increase in GB supply looks modest by comparison,” said Mr Ashworth.

“It seems likely then that Scottish and GB cattle finishers are benefiting from the multiple retailers’ commitments to British beef made at the time of the horsemeat debacle.

“However, with GB farm gate cattle prices some 14% higher than 12 months ago and Government statistics showing the retail price of beef only 6% higher the implications for margins in the processing sector remain stark.”

In contrast the latest price movements in the lamb market make less encouraging reading for farmers, he observed.

“Farmgate prices continue to come under seasonal pressure having fallen around seven per cent over the past month. Auction sales in the early part of this week have edged lower, never-the-less current prices are around three per cent higher than last year.”

However, auction and price reporting abattoir throughputs do point to a higher volume of lambs on the market than this time last year; which would generally put pressure on prices. The Irish farmgate price for lamb has equally fallen, by almost 6%, in the past month and is unchanged on a year ago. However, unchanged volumes of lambs marketed in Ireland suggest a general weakness in the sheepmeat market.

Retail price information shows the price of GB-sourced lamb is about three per cent higher than last year maintaining lamb’s relatively improved competitive position against beef in the retail market.

“However, imported lamb is reportedly retailing over 5% cheaper than last year. New Zealand slaughter statistics show that they had a long tail of lambs to dispose of with the kill in July and August being significantly higher than last year.

“This will have had some impact on export patterns, or alternatively a need to freeze product for export later in the year. However, from all reports coming from New Zealand, the degree of competition likely in the next quarter will diminish on the back of lower production. Indeed having been significantly higher in June and July, New Zealand exports of fresh and frozen sheepmeat fell below year earlier levels in August,” added Mr Ashworth.