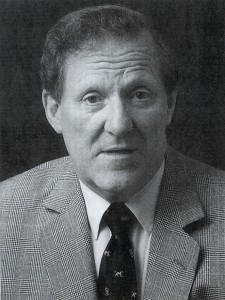 Meat Management is saddened to report the death of Dick Cawthorne MBE, one of the industry’s larger than life characters and once described as: “A doughty and tireless warrior,” for the meat trade.

Born on a farm in Devon in the 1930s and after an initial spell of articles with a chartered accountant and a brief spell in the army he rang Whiteways cider and told them he had an excellent candidate for their advertised position for a man to look after their pigs. “I went along myself and got the job,” he said.

Having built a herd from 0 to 1,000 over three to four years he joined Harris, then managed North Devon Meat, which at one time was the biggest multi-species plant in the country. In 1996 the business sold to Hillsdown and Dick went with it, becoming chief executive of FMC in 1988. In 1992 he bought the Lamberhurst abattoir and Basildon cutting plant from Hillsdown and was at one time processing 20,000 lambs a week.

Dick also had interests with his brothers in a family electronics business and with a partner operated retirement home complexes too. In 1974 he was awarded the MBE for his work with the South West Development Board but had to leave the Palace ceremony early to catch a plane to Algeria selling lambs!
He was also chairman of the former MLC Meat Export Council and president of the European Meat Association.