Jim Dobson OBE, group chief executive of Dunbia Group has been named UK Director of the Year (Large Company) by the Institute of Directors in London, beating off competition from across the UK to scoop the prestigious national title. 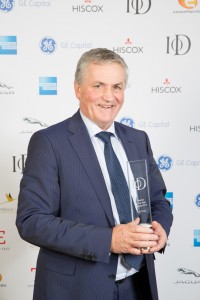 Jim Dobson OBE with his Institute of Directors top award.

Jim, who co-founded the company with his brother Jack in 1976, won the award because judges felt that “he is a very innovative and focussed leader with a strong understanding of the market and competitors.”  He accepted the award by saying: “It is a great honour to be named UK Director of the Year but I don’t see this as an individual award.  I am accepting this award on behalf of everyone who works in Dunbia – my brother Jack who has been with me as we’ve grown the company from a small butchers shop to what it is today, our management team across the group and every single one of our employees who work tirelessly to make Dunbia a company we can all be rightly proud of.”

Listed in the Sunday Times Top Track 100 and ranked in the Top 10 companies in Northern Ireland, Dunbia has seen a 6% increase in sales since 2013.

“Dunbia’s success is a combination of organic growth and strategic acquisition which has consolidated our operation and put us is a very strong position for the future,” adds Jim. “We are the largest processor of lamb in the UK, handling over 1.7m lambs per year and a further 1.1m cattle and pigs to supply local, national and international markets. The foundation of our success is threefold. It is a combination of long-term business partnerships with some of the UK’s largest retail multiples, a true understanding and respect of and a commitment to our suppliers and a strategic expansion programme which has brought us our on-going success.  We plan to build on these principles to ensure future long-term growth for our company.”

Dunbia is widely acclaimed across the industry having secured a range of national supplier and product awards and most recently was named Meat Management UK Manufacturer of the Year 2014.