Phil Howard, co-owner of a two Michelin-starred restaurant based in London, is the latest exemplar chef to team up with EBLEX’s master butcher Dick van Leeuwen for the next in the series of ‘Master Chef and Master Butcher’ product development initiatives. 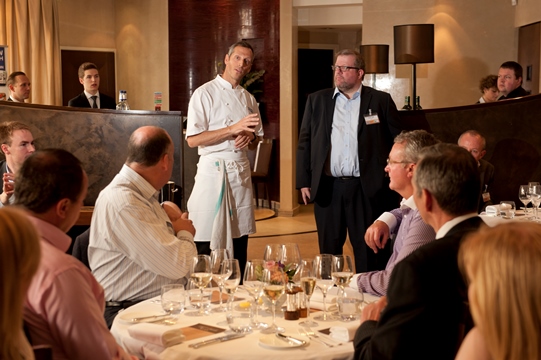 This time the focus is on innovative veal forequarter and offal cuts aimed at the foodservice market. Dick and Phil have worked together to develop the new range which was designed to ensure better use of the carcase and offer real differentiation on menus.

Demand for veal declined during the 1980s due to concerns about the welfare of veal calves reared in crates which deprived them of light and room to move. In fact, the UK led the way in banning veal crates and they have been illegal in this country since 1990, 17 years before such a ban was compulsory in other EU countries. Welfare-friendly veal comes from calves raised on quality assured farms and the animals have permanent ad-lib access to straw, cereal-based feed and water.

Foodservice project manager for EBLEX, Hugh Judd, commented: “The market for quality, welfare-friendly veal is increasing – partly as a result of the positive publicity it has received in recent times. Farmer Jimmy Doherty has been particularly influential in educating the public about why they should demand welfare-friendly veal and many top chefs are recognising that it is a wonderful, delicately flavoured meat which is just as versatile, nutritious and tasty as beef – there is so much more to it than escalopes and liver!

“As much of the veal sold in the foodservice market in this country is imported, we felt it was important to stimulate the market for quality high-welfare veal by introducing a range of affordable cuts which will add interest to menus and at the same time provide good profit margins for caterers.”

Hugh added: “Of course, it’s now more important than ever that operators are aware of the provenance and quality of the meat they are sourcing. Quality Standard Mark veal is totally assured and independently inspected, from animals which are under eight months of age. The standards contain combined guarantees of food safety, animal welfare, care for the environment and enhanced eating quality, giving chefs confidence in the dishes they are producing, while also protecting their reputation and that of their business.”

Phil Howard said: “I thoroughly enjoyed working with EBLEX on this project. Dick and I trialled a number of different veal cuts before settling on the final range. Personally, I am a big fan of veal and it’s a regular feature on my menu. Veal cheeks are always very popular and I was particularly impressed with lean veal mince which I can see working well on the lunch menu.”
For a full list of veal cutting specifications and more information about the Quality Standard Mark Scheme, visit www.eblextrade.co.uk or call the Hotline on 0845 491 8787.