Edwards of Conwy sends thousands of bangers to Malaysia

Edwards of Conwy sends thousands of bangers to Malaysia

It’s British Sausage Week – but the love for the British banger has spread around the world, as Edwards of Conwy have discovered. 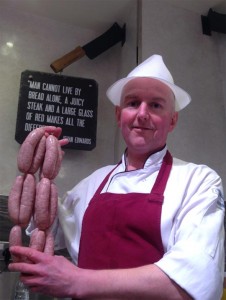 The Far East has discovered a taste for the Welsh sausage; Edwards has just secured another order from Malaysia for 88,000 sausages and 12,000 slices of their dry cured bacon.

“We want to double the business over the next three years, it is ambitious but that is our aim.”

The Malaysian love for Welsh bangers came about through a local family who had a shop in Kuala Lumpur, who put them in touch with a distributor in the Far East.

At first just a single pallet of sausages was delivered to Heathrow Airport for an onward flight to Malaysia.

“It always made me smile when the freight cost was always more than the cost of the product,” said Mr Edwards.

Sales grew and grew and now thousands of sausages are delivered by sea freight, as this is more cost-effective.

The company has also launched a new limited edition product to celebrate British Sausage Week, which runs from November 3 to November 9, 2014.

The new Honey Glazed Parsnip Sausage is a special diamond award-winning recipe shared only among those elite butchers who are granted membership of the Q Guild of Butchers.

The recipe was developed by another Q Guild butcher, A Pearson & Sons, of Ashton under Lyne, and was last year’s Smithfield Diamond Award winning Sausage.

Mr Edwards said: “The Honey Glazed Parsnip Sausage makes a great autumnal treat and will be available in our newly refurbished high street shop for a limited time only.”