Following six months on the road sampling over 1,300 pork products, the National Champion of the 2012/2013 BPEX regional roadshow and Pork Product Excellence Award has been unveiled as Harrogate-based Elite Meats. 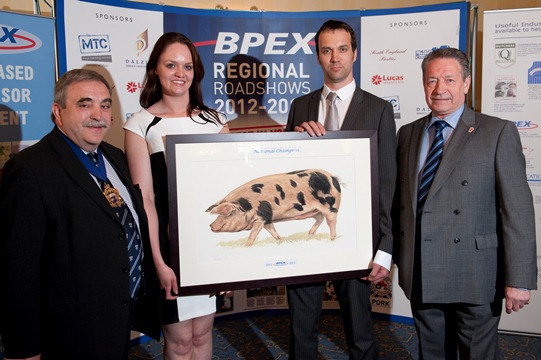 At the presentation at Butchers Hall, 20-year old Charlotte Atkinson from Elite Meats Ltd was awarded the prized title for what judges described as a simply sublime Caramelised Onion Pork Pâté.

Charlotte and her father Gordon Atkinson, champions of the north-eastern leg of the roadshow (which proved an exceedingly popular area for competition), joined the six other regional champions in London to celebrate the end of this year’s awards season. They were presented with an original watercolour painting of an Oxford Sandy and Black pig by artist Chris Pendleton, with the other finalists receiving a limited edition print.

Charlotte, who works alongside her father in the business, learnt the recipe and used it to make her competition debut at the Harrogate event in January.

In reaction to winning the top prize, Gordon Atkinson said: “I am absolutely delighted! We entered the competition at Harrogate feeling very confident we’d win the category – delighted to win of course, but we were expecting it with our pork offal pâté because there are not as many entries of that type of product.

“We were surprised to win the competition outright, but thrilled of course – absolutely thrilled! It is a really good product and it’s utilising an undercut piece of meat; we kill all our own pigs, and we find that it’s a really good way of making less go to waste.”

Keith Fisher, BPEX butchery and product development manager said: “This was a very well deserved win. The judging panel was overwhelmed by the quality of all seven products and it was an exceptionally close call, however, Charlotte’s pâté edged ahead thanks to its well-balanced flavours and creamy texture – just perfect on a slice of fresh bread!

“We are seeing more speciality pork products entered into the roadshow, as butchers look to innovate in order to offer customers a wide range of exciting cuts and products that also make wider use of the carcase. This year interest and success in it has absolutely boomed, with two of the seven regional champions triumphing from this category.

“We’ve seen just under the number of products we had last year, but the quality has been exceptional. At a time when food safety and security remains very much in the spotlight, these awards also mean that butchers and farm shops can differentiate themselves based on the quality and provenance of their products.”