England’s Best Steak Pie Competition 2013 has attracted a record number of entries, with over 100 pies submitted for judging by retailers, caterers and manufacturers across the country. 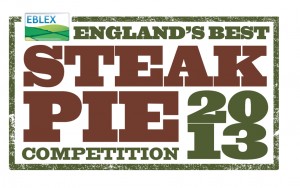 All the entries will be evaluated by a team of judges next Wednesday (24th April). The pies will be judged against a set of criteria including the raw and cooked appearance, as well as the overall eating quality and flavour, texture and succulence of the filling. Pies that reach the standard will be given gold, silver or bronze awards. Only those that achieve a gold award will make it through to the next stage of the competition.

All gold award-winning pies will then undergo a further round of judging in the final, when a winning pie will be determined in both the Foodservice and Retail categories.

Only one pie can go on to win the overall title ‘England’s Best’ and that will be awarded to whichever category award-winning pie achieves the highest score overall. The announcement of the overall winner will be made at the prestigious Meat Management Awards on 2nd July in Birmingham. Click here for more information.

Head judge, Hugh Judd, foodservice project manager for EBLEX, said: “With over 100 entries in this year’s Steak Pie Competition, judging is going to be incredibly tough! Good luck to everyone taking part. The other judges and I are poised and ready!”