Martin Crombie and Michael Perkins from Aubrey Allen are celebrating their success representing England as the nation’s entry in the European Butchery Trophy, held in Lyon, France over the weekend.

The two Warwickshire butchers finished in fourth place closely behind Switzerland and two pairs from France, winning 600 euros and putting England ahead of four other European entries including Ireland and Belgium.

The competition with its theme of ‘Meat in a Decorative Setting’ took place over a four hour time frame and involved preparing and presenting a specified range of cuts from half a lamb, a veal rack, forequarter and flank, and a beef rump on the bone. In addition the Aubrey Allen duo had to bring a cooked sample of the 5-rib rack of veal for the judges to taste. 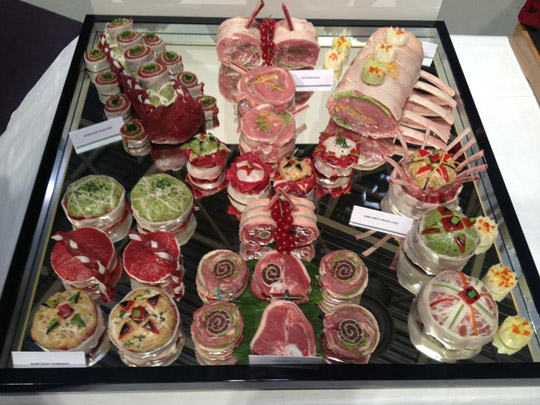 The judges included a panel of Masters Butchers and several ‘Meilleurs Ouvriers de France’ who marked each cut, the overall creativity and decorative presentation, and the commercial factors and profitability values.

The event was open to all independent butchers in Europe with one team representing each nation with the exception of the organising country, which was permitted to enter two teams.

Russell Allen, managing director of Aubrey Allen who accompanied the team and witnessed their skills in action said: “It was a terrific honour to represent England and both Martin and Michael performed brilliantly under enormous pressure. It is a fantastic achievement to come fourth and is a real fillip to our customers and everyone who works at our Leamington Spa shop and Coventry operation to know that we are one of the best butchers in Europe.

“It was a terrific opportunity to showcase the best skills in the UK with our European counterparts. It was also the first time we had been asked to take part in the competition and the whole experience has been extremely beneficial. Our goal for the next competition would be for England to finish in the top three,” he added.