The first leg of the BPEX Regional Roadshow and Butchers Pork Product Excellence Awards got off to a great start last week, drawing in 250 products from 40 butchers in the region. 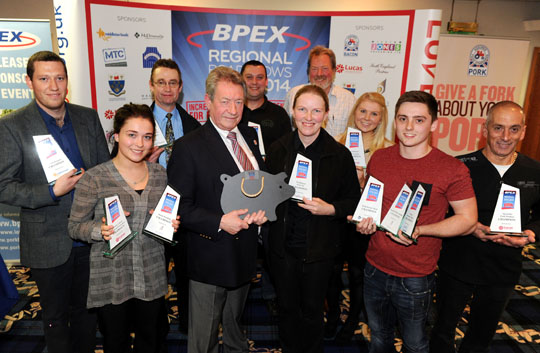 North West champions at the recent BPEX Roadshow in Bolton.

Displaying a tasty combination of locally-produced pork and homemade pastry, it was Robinson’s Farm Shop from Halifax that excelled in the ‘Traditional Pork Pie’ category and scooped the ‘Overall Champion’ crown for the North West with ‘Pork Pie.’ 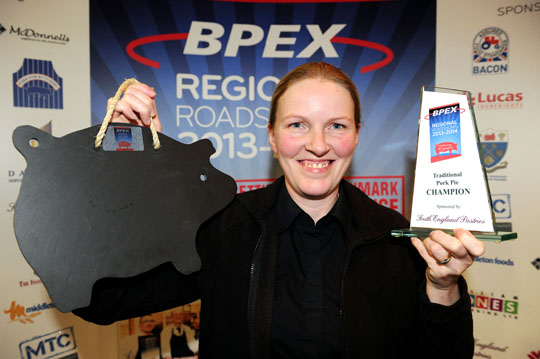 Taking the plunge for the first time, David and Rachael Robinson headed to the Reebok Stadium to see what the industry judges thought of their products having only opened the doors to their bakery in May.

Rachael said: “With only a few months to perfect our pork pies, I was overwhelmed to hear the news that not only had we won the ‘Traditional Pork Pie’ category but we’d been awarded the ‘National Champion’ title for whole event! To come out on top on our first attempt is a great achievement.

“We cook our pork pies daily to make sure they’re fresh and flavoursome and make our pastry on-site. At the farm shop we believe that you get out what you put in so we always use the best local quality produce to make quality pork pies.”

The farm shop produce comes from its own working farm as well as several neighbouring farmers in order to reduce food miles and ensure customers get the best quality meat. Rachael added: “Our pork is a real favourite with customers and its superb flavour makes a great addition to pies. This has given us a real incentive to develop even more tasty pork products that our customers, and of course the judges, will love!”

Additional success on the night was celebrated by Chester-based Vaughans Family Butchers, who picked up three of the twelve category champion titles on offer. Their ‘Pork and Leek Sausage’ topped the Speciality Pork Sausage category while their ‘Mexican Chilli and Rice’ championed in the ‘Pork Ready Meal’ category.

What’s more, at just 21 years old Matthew Edwards picked up the prestigious Young Sausage Maker title with his ‘Traditional Pork Sausage’ having worked at the butchery for a mere eight months.

Matthew said: “It’s fantastic to be recognised as a young butcher. At 15 I started working at a local butcher shop on a Saturday and since then I have taken it up as a full-time career; I love interacting with customers and developing new products, so I jumped at the chance to showcase my ‘Traditional Pork Sausage’ to the team of industry judges.”

Keith Fisher, BPEX butchery and product development, manager said: “We were delighted to see such a great turnout from butchers in the region, to what is our tenth season of product evaluations.

“The standards on display did not disappoint, which made judging incredible hard. From the 250 entries, half went away with a gold award – scoring 95-100 points out of 100. This is real testament to the quality to be found in butchers and farm shops in the North West.”

The ‘Pork Pie’ from Robinsons Farm Shop will now go forward to the National Final at Butchers Hall, London in June 2014.

The next event in the 2013-2014 season takes place at the Sandy Park Conference Centre, Exeter on Wednesday 9 October. Butchers in the region are invited to browse trade stands and enter the product evaluation. Entry forms and guidelines can be downloaded from porkforbutchers.bpex.org.uk or entry and payment can now be done online at www.bpexentries.co.uk/roadshows.