The first BPEX Regional Roadshow and Pork Product Excellence Awards of the 2012-2013 season got off to an excellent start in Norwich, with the Overall Champion title going to Tavern Tasty Meats for their imaginative product ‘The Black Quack’!

The Black Quack, a Scotch egg made with a duck egg wrapped in a black pudding and sausage meat mix, is a relatively new product from the Norfolk-based rare breeds butcher. It triumphed in the Speciality Pork Product category before being crowned champion for the East of England at the Norfolk Showground last week.

The event drew in over 125 products from butchers in the region, with additional awards going to Papworth Farms, young sausage maker Sean Jameson of Bradwell Butchery, Bakery & Delicatessen and 2011-2012 National Champion, Archers of Norwich. 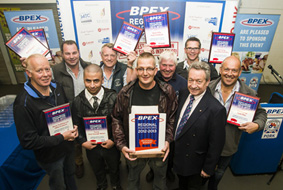 Tavern Tasty Meats managing director, Roger Human, explained how the product came about, he said: “I actually picked up the idea of entering a speciality product from another butcher at the roadshow last year and decided to give it a go. James Nicholls, my kitchen manager, has been working on this recipe over the last few months to perfect it. I never expected it to do so well on its debut but the judges absolutely loved it!

“James has recently gained his Level 5 Diploma in Management and Leadership – a year ahead of the course deadline – and will be presented with his degree at the honours ceremony in October. He is really passionate about everything to do with food.

“The Black Quack is a really innovative 6oz scotch egg. Not only do we use a duck egg instead of a chicken egg, it is oval in shape not round. It also contains a mixture of black pudding as well as our award winning sausage meat, hence its name, and is incredibly delicious served with a pint of beer!”