A Food Standards Agency advertising campaign featuring an image of tasty-looking lamb chops served in a urinal has been described as ill-judged by EBLEX sector director Nick Allen. 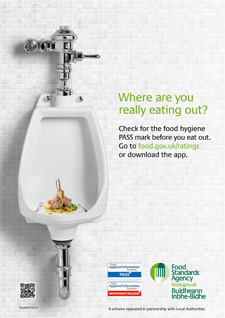 The campaign, which is designed to encourage people to check the hygiene ratings of restaurants, has provoked strong feelings in the sheep industry, who feel the advert unfairly associates lamb with food safety issues.

EBLEX director Nick Allen said: “While we support the Food Standards Agency’s aims of promoting good hygiene standards in restaurants, using lamb as the ‘poster boy’ for this campaign is ill-judged and could possibly damage public perception of the meat.

“The image of a lamb dish in a urinal undoubtedly associates our product with poor food hygiene, while the reality is that lamb, and red meat in general, is rarely linked with food poisoning.

“As an industry we are very proud of the lamb we produce and the high standards throughout our supply chain. It is extremely disappointing that an organisation such as the Food Standards Agency should call into question consumer trust in our product in this way.”

Data from public health organisations shows that out of 70 foodborne outbreaks reported in the UK in 2010, just 14% were identified as being associated with red meat and only a fraction of these with lamb. Poultry meat and crustaceans/shellfish were far more prevalent in reported outbreaks, associated with 29% and 21% of outbreaks respectively.

AHDB is submitting a complaint to the Advertising Standards Authority on the grounds that the campaign is misleading based on these statistics.