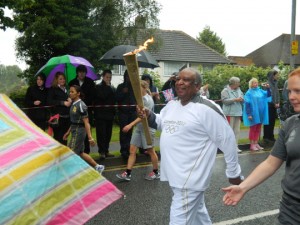 Past BDCI chairman and liveryman, Jim Redmond proudly bears the torch for the London Olympics.

Meat machinery supplier, Jim Redmond was the proud torchbearer for the London Olympic Games through the streets of Kettering, Northamptonshire.

As revealed by Meat Management’s Mike Britain earlier this year Jim shot to fame in the 1992 games when he came to the aid of his son, Derek to help him cross the finish line, despite having succumbed to injury.

Speaking to Meat Management following his torch relay Jim said: “It was utterly fantastic, the atmosphere and support was extraordinary. A great week and I’m very proud.”