Owton’s from Southampton will be hoping for more success at next month’s Q Guild Barbecue Championships finale, after being announced as the winner of the Speciality Barbecue Product category in the Southern regional heat for its Oozing Lamb Fillet. 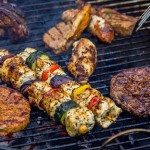 The Q Guild Barbecue Championships will take place on 31st May.

National winners in each of six BBQ product categories will emerge at the annual barbecue competition, with one being crowned the overall supreme champion by the Q Guild, which represents 110 award-winning butchers from the Scottish Highlands down to the south coast.

Almost 300 products from Q Guild butchers nationwide were entered for this year’s competition. The national final takes place at The Windmill Village Hotel, Coventry, on 31st May.

Q Guild national chairman, Mark Turnbull said: “Entries have increased this year, such is the prestige of winning a Q Guild BBQ championship. Hopefully the weather will warm up as the 2015 BBQ season gets into full swing and one thing’s for sure – Q Guild butchers come well equipped to cater for al fresco aficionados nationwide.”