Harper Adams Agricultural College has handed out a number of honorary degrees and fellowships, including one to NFU President Peter Kendall.

The East Bedfordshire farmer was presented with an honorary doctorate in recognition of his service to UK agriculture and leadership role within the NFU. 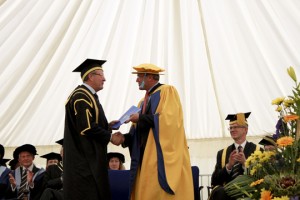 Kendall, who farms in Eyeworth, was elected president in 2006 and is currently in his fourth term. Mr Kendall also presented the 600-plus graduands with their awards during the ceremony.

“I am incredibly proud to have received this honorary degree from such a well-respected agricultural college. It is important to stress, however, that this degree recognises the high calibre of staff at the NFU, who work hard to support members, the farming industry and help to make my job possible,” he said.

“I am also proud to be a farmer at a time when farming is delivering so much to the people of Britain, whether that’s a crucial role in the economy, offering a wide range of careers, care for the environment, world-class welfare standards, cleaner energy and not to mention the fantastic food produced throughout the country.”

An honorary doctorate was also awarded to Professor Dick Godwin for his academic contribution to agricultural engineering and significant commitment shown to supporting and enhancing the work of the Engineering Department at Harper Adams. Professor Wynne Jones and Clive Gurney were also conferred with the Fellowship of Harper Adams University College.