Andrew Brassington of Ludlow Food Centre and Kyle Mottram of Keelham Farm Shop have been successful in matching the performance of the UK’s 2012 team by finishing in fifth place, ahead of France at this year’s International Young Butcher Competition. 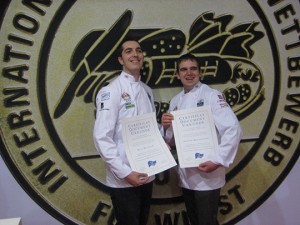 Other similarities to 2012 included the Dutch walking away with the team prize for a third successive year when Jeroen Kroon of Holland was crowned International Young Butcher 2013 with team mate Tommy Kuijten taking third place after Swiss competitor Lukas Wattinger was declared runner up.

Federation chief executive Roger Kelsey said at the presentations: “This has been the strongest all round UK performance in the competition to date. With the absence of Luxembourg and Greece it was always going to be difficult. There has been improved performance from Austria and it was always expected that host nation Germany, and Switzerland who will host the competition next year would want to do well.”