The 2012 International Young Butcher Competition takes place in Holland this week and the National Federation of Meat & Food Traders entrants Luke Haigh and Mathew Gothard are expecting to build on the achievement and progress made in the competition last year by home grown contestants Matthew Hill and Bryce Lawson. 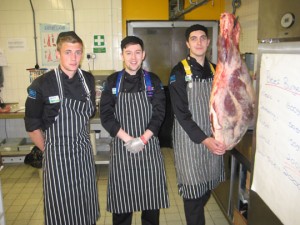 NFMFT chief executive, Roger Kelsey, said: “We are fielding our strongest team yet. Both the Federation and the lads involved are better placed this year than ever before by way of preparation, skill and knowledge about the competition and what we can expect from the other six teams and we are really up to the challenge and looking forward to the next few days”!

Mathew and Luke who are competing against twelve other contestants from Austria, France, Germany, Holland, Luxembourg and Switzerland will be supported at the competition by fellow team mate and reserve candidate Kyle Mottram, who is looking to compete in Frankfurt next May.

Keith Fisher, meat product development manager at BPEX will join the team of seven international judges as the English representative. Industry expert and artisan butcher Viv Harvey, who has coached the team during the last six months in preparation for the competition at the Butchery School in Best, will be joining the Federation’s delegation by giving his support together with Roger Kelsey and Federation IBC representative Neil Curtis.

Kelsey continued: “The whole exercise with these young butchers representing the craft trade of this country, demonstrating their skills and competing on the international stage amongst the very best in Europe, is testimony to what can be achieved with good solid support and co-operation”!

The competition is organised by the International Butcher Confederation (IBC) and the NFMFT has been supported with sponsorship from EBLEX, BPEX, Meat Training Council, Worshipful Company of Butchers, RAPS, Gesame, Weddel Swift and Leeds City College. The results will be published on www.meatmanagement.com on Friday

Will the Chancellor ‘chicken out?’
BPC and Morrisons to lobby Government on chicken tax