Five ‘Hambassadors’ have been appointed following a high profile and nationwide search led by Jimmy Doherty, as part of the industry’s ‘Give a Fork About Your Pork’ campaign.

Helping to support Quality Assured farmers and their mission to promote Red Tractor pork are Harriet Smith, Bill Pellet and Adam Lavelle – pork enthusiasts all based in London. Joining them are Laura Lavelle, a food blogger from Shrewsbury and Chris Doney, a You Tube devotee from Sussex. 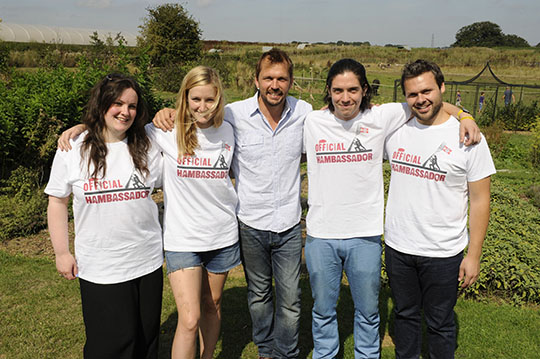 Having scoured the nation for passionate ambassadors, the newly recruited volunteers will take action to raise awareness for the issues facing pig farmers and the standards behind the Red Tractor logo. The five will be paid in pork for their efforts and receive a year’s supply of pork, bacon, ham and sausages!

Marking their appointment, the ‘Hambassadors’ met Jimmy Doherty at his farm in Suffolk to learn more about their important role. Jimmy educated the new recruits about the day-to-day role of being a Red Tractor pig farmer and the rigorous standards that must be adhered to.

Laura said: “I already champion local producers on my blog so applying to be a ‘Hambassador’ was a natural step. I love pork and I’m passionate about animal welfare standards, this really is a dream job! I’m really excited about taking up my role as Hambassador and doing my part to help pig farmers. It’s been a real eye-opener to learn more about the Red Tractor scheme and I can’t wait to get started.”

The five successful ‘Hambassadors’ were chosen by BPEX after a two-month recruitment drive that ran on www.lovepork.co.uk and its social media channels, as well as a national and regional PR campaign.

They were picked after submitting the most creative ideas on how they would educate shoppers and encourage peers to choose Red Tractor pork. They will now be used to spearhead BPEX’s PR activity throughout the remainder of the year, which will include writing a series of blogs for www.lovepork.co.uk and involvement in high profile campaigns, such as British Sausage Week.