Kantar Worldpanel has released its Christmas figures, which  show that the winners were lamb and chicken, with beef roasting joints performing well. 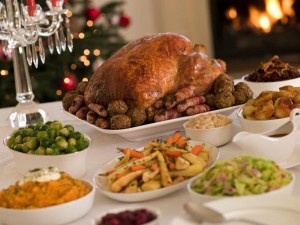 Christmas roast turkey with all the trimmings.

Kantar client executive Michelle Coggin revealed: “Most of the success came from shoppers switching spend from beef and pork. Leg joints were driving this with 8% growth on this more premium cut. Waitrose and Lidl were the key drivers of the success of lamb.

“Fish continued to flourish over the Christmas period, continuing a long term trend of growth, seeing value up 2.4% compared to last Christmas. Growth was driven by more shoppers, buying more often over the four weeks covering Christmas. Shoppers were switching spend out of meat and poultry with the key gains coming from pork and beef.”

Coggin revealed that fresh chicken had an impressive Christmas growing at 3.3% in value and 8.4% in volume, showing another potential break with tradition as switching gain came from the more traditional turkey, beef and pork.

“In some stores, chicken was presented as a viable alternative to traditional Christmas meats and this has helped to drive a greater presence in our Christmas baskets. The movement from turkey to chicken is a small proportion of overall sales, but something we predict may continue in 2016,” Coggin added. “Particularly if we see more convenient Christmas themed products merchandised in the Christmas fixtures. Outside of chicken, duck and other poultry/game saw significant growth from a small base as people tried the other traditional favourites for Christmas.”

“People are increasingly only buying one roasting protein over Christmas, so making sure your protein wins at the Christmas meal is increasingly important,” she commented. “What do we predict for next year? Diversity will increase in meat, fish and poultry with more categories becoming a part of Christmas. Convenience will continue to grow with quicker and easier options in terms of preparation and cooking times increasing in importance. The Christmas dinner plate will be about quality food which is simple to prepare and easy to cook, with shoppers willing to pay more for solutions.”