Macsween of Edinburgh won the ‘Morrisons Award for Outstanding Business’ at the IGD Food Industry Awards 2012. The prestigious award recognised Macsween’s important contribution in the food and grocery industry. 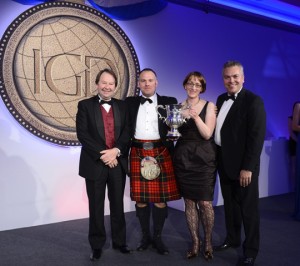 Macsween of Edinburgh collects its Morrisons Award for Outstanding Business at the IGD awards.

The judges commended Macsween for being ‘a company with innovation as its lifeblood, which has delivered accelerated, sustainable growth in this challenging economy’.

Joint managing director, James Macsween, said: “We are delighted and honoured to be recognised by this award, as a family company we aim to be innovative in areas of NPD, marketing and staff development and at the core of our values is the desire to grow in an environmentally and ethically sustainable manner, always focusing on the consumer’s needs. Therefore winning such a prestigious award is very affirming for us and we will continue to strive for excellence”

After a demanding judging process, which saw Macsween present to a panel of industry judges last month, the winner was announced at the award dinner held at London’s Lancaster Hotel in front of many of the industry’s big names.

The judges also praised the company’s commitment to prioritising environmental sustainability; its use of digital media; its product innovation including the launch of the microwavable range, which has brought about a dramatic change in the whole demographic of haggis consumers; as well as its commitment to staff development