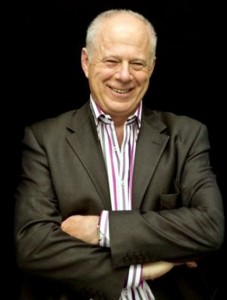 Matthew Fort, who will present the Q Guild’s 2014 Smithfield Awards.

Matthew, food and drink editor at The Guardian for over a decade, author of several award-winning books on food and expert judge on the popular TV series, The Great British Menu, will hand over the honours at the competition finale to be staged at the Butchers Hall in Smithfield, London, on 13th November.

He said he recognised the important role played by local butchers and was looking forward to attending the high profile event.

All 110 members of the Butchers Q Guild, top-notch award-winning meat men and women from the Scottish Highlands to the south coast, are eligible to enter the Smithfield Awards, now in their 28th year.

They cover eight product categories – sausages, burgers, ready to eat meat and roasts, bacon and cured products, pies and bakery – both hot and cold – kitchen ready products, and ready meals, a new addition this year to reflect the great variety of products offered by Guild members.

The deadline for entries from all Q Guild regions – Scotland, the north-east, north-west, midlands, east, south and south-west – is Monday, September 29th.

Judging by independent panels of food and meat industry experts will again take place in the Scholar’s Restaurant at the City of Glasgow College, the leading provider of education, training and research for the culinary industry in Scotland, on 16th and 17th October.

At the presentation day in the Butchers’ Hall, gold and silver awards will be handed out in each class, with diamond awards going to individual product category winners, one of whom will emerge as the overall Smithfield Awards supreme champion.

There will also be prizes for the best beef and lamb products of English and Scottish origin, and the best pork product overall. Smithfield Awards winners, especially those landing major titles, can look forward to in-depth exposure, which has been proven to give a tremendous boost to trade.

Q Guild national chairman, west Yorkshire butcher Brindon Addy, said: “The Smithfield Awards are a true and stringent test of the vast variety of products hand-crafted by our members nationwide, who represent the cream of Great British butchery.

“They have an opportunity to win one of the meat industry’s most prized accolades, as well as receiving expert feedback, which proves invaluable in helping entrants enhance their products and launch even more successful ones.

“Product innovation remains a key activity in the Q Guild. Almost 400 individual products were entered for last year’s Smithfield Awards. We are hoping to top that this year and discover even more fantastic products made by our members across the nation.”