Home » News » Meating out the punishment at Smithfield

Meating out the punishment at Smithfield

Meating out the punishment at Smithfield 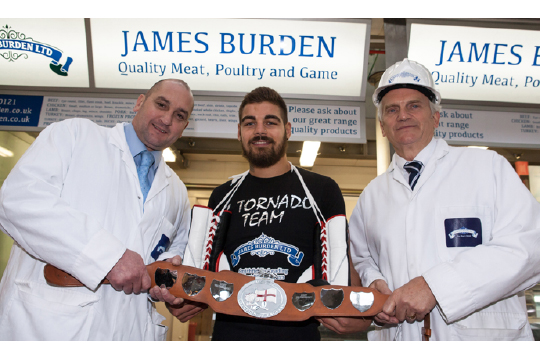 Sawbridgeworth based Goodjohn ‘squared up’ at the unlikely hour of 1am to fit in with Smithfield’s pre-dawn trading hours and met some of the team at James Burden, who were keen to catch up with their lad’s progress.

CEO Trevor Hussey (pictured), who was ringside at Goodjohn’s recent successful English light-welterweight title fight, commented “James Burden has gone from strength to strength in recent years and it is great to be in a position to be part of Tyler’s support team as his career develops. We welcome the announcement of his next fight against John Wayne Hibbert on 31 January. This is for the WBC International light-welterweight belt and also an eliminator for the British title – we will be there to support him all the way.”

A number of the Burden’s staff have close ties with boxing and were keen to meet 23 year old Goodjohn, who has been boxing since he was ten and turned professional in 2012. Steve Welch, pictured left of Goodjohn and manager of one of the James Burden outlets at Smithfield, is himself an amateur boxing coach and having watched Goodjohn progress over the years introduced him to the James Burden team when he turned professional.

Goodjohn took his Welterweight belt with him to Smithfield to show his supporters and naturally went away with a few pounds of the best steak to set him up for his next match!