The Minister visited a number of exhibitors at the biennial event taking place on 2nd and 3rd July at the NEC Birmingham, including EBLEX, the promotional body for lamb and beef levy payers, which is also staging a major marketing conference at the NEC on the second day of the event. Commenting, the Minister said: “It was a most interesting opportunity to meet with a number of different businesses serving the meat and food processing sectors with some very positive stories to tell.” 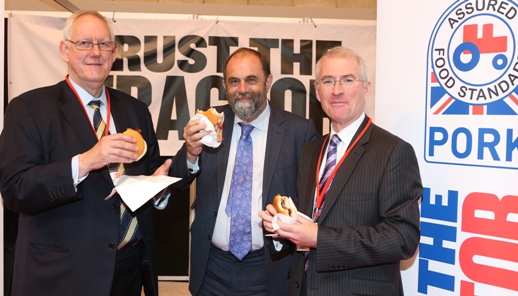 One such example was the launch of The Great British Butcher by ingredients supplier, MRC. Scott Dixon, brand manager for MRC The Flava People said: “It’s the second year we’ve done the show and we’ve really increased our operations just to capture as many of the people coming through from the butchery and the wider trade as possible, we’ve got a pretty good space at this one. It’s all about the cooking and getting people tasting and smelling the products. We’re really happy, the traffic’s coming through and we’re doing sampling to really create a buzz around the brand. The biggest thing for us is to get the brand name out there.”

Jason Wilkie, director, Tican Chilled added: “I think the show started slowly, but since then it’s really kicked in to life; we’ve seen a lot of suppliers, a lot of existing customers and took some potential leads as well, so all in all the first morning’s been very good. Bring on the afternoon and tomorrow.”

Visitor Steven Turton, from Andrew James Butchery in Devon said: “I find it a most useful show. I’ve got some good ideas and I’ve been lucky enough to meet some new potential suppliers as well.”

Other highlights of the first day included a brand new Premier Products Competition, run by the National Federation of Meat & Food Traders and The Premier Young Butcher Competition, showcasing the craft skills of 18-23 year old retailers.