“Think of the cattle you’re producing as food, and consider what the beef consumer wants.” This was the take-home message from Murray Hardy of Scotbeef abattoir near Stirling when he spoke to the Clyde monitor farm community group at the recent two-day monitor farm meeting. 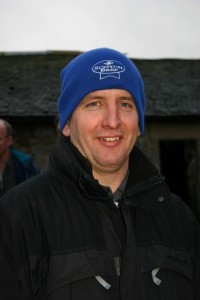 Andrew Baillie: “For the majority of meat wholesalers, the optimum beef carcase is conformation grade R or better, 4L for fat cover and weighing 340 – 360 kgs.”

Carstairs Mains in South Lanarkshire is owned by Andrew Baillie and is one of the network of Quality Meat Scotland (QMS) monitor farms throughout Scotland.

Andrew and his father, David Baillie of nearby Calla Farm, both consign finished stock to Scotbeef.

On the first day of the meeting using five, 100% beef genetics, finished cattle (two heifers, three steers) at Calla, to illustrate his talk, Murray Hardy explained some of the main points for beef finishers to consider.

“You only get one chance to slaughter a prime cattle beast, so maximise your return by taking it to its full potential, but not beyond.

“When your cattle are ready to go, sell. Don’t be tempted to hang onto them in the hope of the price improving, by doing that you run the risk of the cattle going over-fat.

“Excess fat is costly for farmers to put onto cattle and costly for processors to trim off.

“For the majority of meat wholesalers, the optimum beef carcase is conformation grade R or better, 4L for fat cover and weighing 340 – 360 kgs.

“Heavy carcases create problems for retailers, particularly regarding the size of cuts. A standard eight ounce sirloin steak off a heavy carcase is thinner and much less appealing than an eight ounce steak from a 350 kg carcase.”