In a year when British farming has received backing from consumers, the NFU is urging the public to help turn around a decline in self-sufficiency that means the UK produces just 62% of its own food.

Starkly, the UK’s current self-sufficiency rate means that today, 14th August, is the day when British food supplies would run out if all the food produced in Britain in a year was stored and eaten from January 1st. The NFU is determined to reverse this trend and is launching a Charter looking for the public, politicians and food industry to sign, pledging their support. 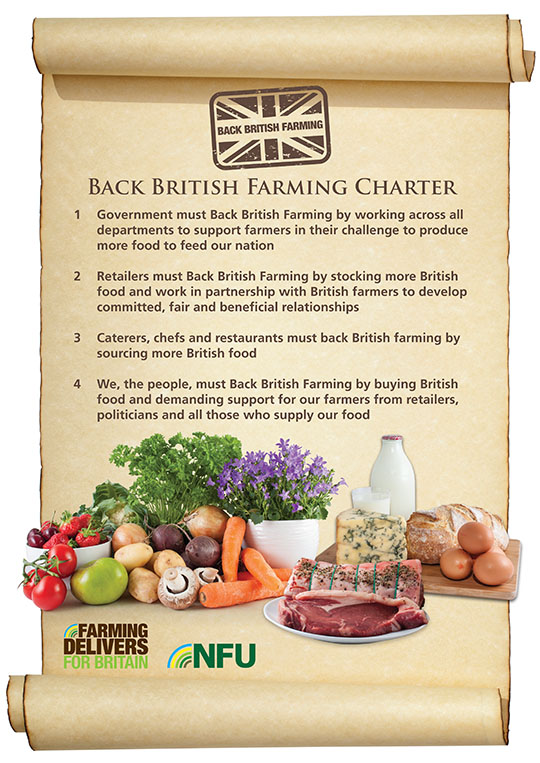 Evidence demonstrates that the will is there. A One Poll survey has revealed that 78% of consumers thought supermarkets should stock more British food and 42% said they were more likely to buy more traceable food produced on British farms. And farmers are ready to rise to the challenge to produce more food sustainably.

NFU president Peter Kendall said the decline in self-sufficiency in many sectors should be a warning signal that something is wrong.

“To think that today’s date would signal the time when our domestic food supply runs out is frankly alarming,” said Kendall. “It says to me that we must act.

“As an industry we have had a challenging decade but the realisation has dawned that as a nation we can’t simply go around the world chasing the cheapest deal for our food.

“So, instead we need to look closer to home. Right across the board farmers have a fantastic natural capacity to produce more British food, given the right market signals and the confidence to invest. We have the right technologies to produce more from less with precision farming helping to target fertiliser and crop protection products within centimetres. Laser technology can even pinpoint an individual weed, improving accuracy and efficiency. Crops grown under cover help to lengthen the season for our British fruits. But there is more to do to empower our farmers to enable them to make the most of our natural resources and feed our growing nation.

“I want to know our government is really getting to grips with its food vision and ensuring that sustainable, productive farming is across all government departments. Let’s create an environment which really means farming businesses can invest. Let’s address market failure and iron-out volatility to enable the entire food chain to grow supply.

“We have all learned the lessons of long, complex supply chains and retailers are all telling me that they want to work with British farmers to ensure their shelves are stocked with more British produce. We currently import around £37.6bn of food and drink. We are a trading nation but at a time of economic uncertainty a strong food producing industry is essential.

“I couldn’t agree more with the Prime Minister David Cameron when he said last week that, ‘farmers are the backbone of Britain.’ I am immensely proud of British farming, and I urge everyone that cares about British food to sign our pledge being launched today to ensure this British industry thrives.”

To sign the online charter and learn more about Back British Farming visit www.farmingdelivers.co.uk and look for sign the charter (Available from Wednesday).