Nicholson’s Butchers in Whitley Bay has described the response to its landmark centenary week celebrations as “absolutely fantastic and a proud and memorable experience.” 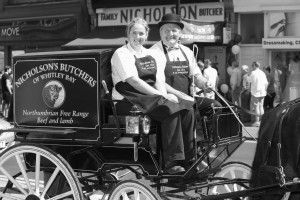 Doug Nicholson and his daughter Kathryn aboard the pony and trap used for the centenary week celebrations.

The Park View shop said the weather could not have been better for the climax to the week, a free barbecue outside the shop on Saturday (May 17th) – 100 years to the day since Nicholson’s first opened its doors.

“The shop had a constant stream of customers all day. We gave away 200 sausage sandwiches and the same number of burgers at our celebration barbecue on Saturday lunchtime. They were all gone within 90 minutes,” said Kathryn Nicholson, owner Doug Nicholson’s daughter.

Throughout the week, Nicholson’s staff also entered into the spirit of things by wearing old-fashioned butchers’ uniforms – white shirts and black aprons with bowler hats.

Doug Nicholson added: “We wanted to do something really special for our milestone centenary and the many customers who have been supporting us across the years. We really pushed out the boat and the response was out of this world. It was a superb week and one we will remember for many years to come.”