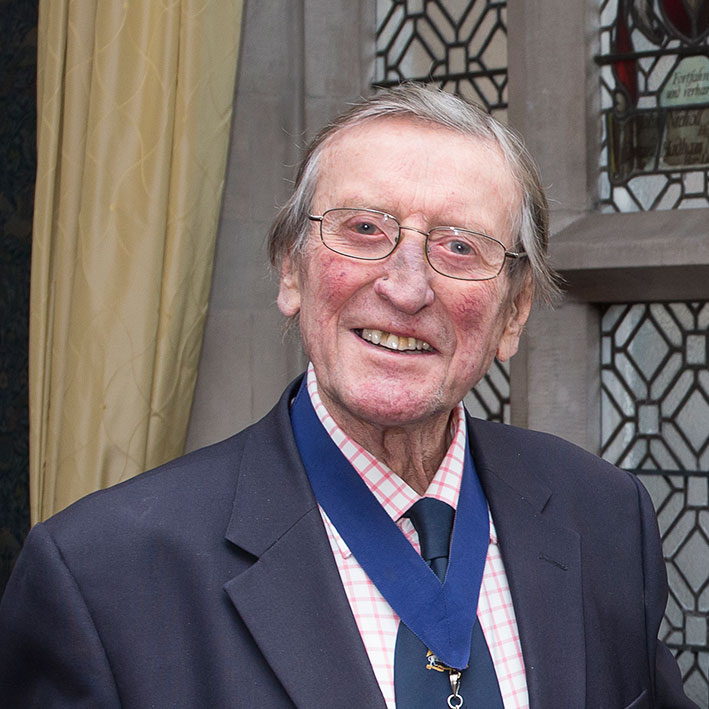 Meat Management is sad to record the death of Past Master of the Worshipful Company of Butchers, John Brewster OBE.

John was born in Paris on April 17th 1930 to a family involved in the meat industry based at Smithfield Market. His uncle, James A Brewster was Master in 1961.

With the oncoming of the Nazi regime he, and his family, were evacuated to England in 1939, leaving their car at Calais, and again at the age of nine he was evacuated to Argentina with his sister Wendy, leaving his parents behind, to live with a relative in Buenos Aires where he attended St George’s College, a school for English patriots. He had learnt to speak French fluently during his short time in Paris and he quickly learnt to speak Spanish.

Astonishingly he witnessed the sinking of the Admiral Graf Spee in the mouth of the River Plate.

At the age of nineteen he returned to England and did his National Service in the Tank Regiment rising to the rank of Major.

When he completed his National Service he joined his family company, Gee & Webb Ltd, at Smithfield Market where with the knowledge he had obtained from his family in Argentina he became an expert on beef and especially Scottish beef gaining respect from producers in Scotland.

He was awarded the OBE for his services to the meat industry and Scotch beef in particular.

He  joined the Butchers’ Company following in the footsteps of his father and uncle, and was clothed into the Livery on the 1st November 1951, becoming Master in 1983.

John married and became father to James and Katie. His marriage was dissolved and he married Daphne gaining another son, Edward. Both James and Edward are members of the Livery.

The weekend before he died he had enjoyed the company of his family including his grandchildren, who he had a special relationship and affection for – all seven of them.

To his family and close friends he was known as William, but to his friends in the Livery and the meat industry he was ‘John’ or ‘JB’.

John was deeply involved with Smithfield Market and ran his company, Gee & Webb Ltd, closely supervising, at the same time, the changes occurring at the market with the inception of rules and regulations required by Europe.

He quickly became involved with the Smithfield Market Tenants Association and became its chairman. This led him to becoming more involved with the City Corporation with the proposals of change and the relocation of the market. He was elected to the Court of Common Council which allowed his voice, on behalf of the markets tenants, to be heard and where he gained much respect for his work on other City Committees, planning in particular.

As past master, Graham Jackman said: “To the Butchers’ Company he guided us through many difficulties over the years and his knowledge, experience and influence were very much appreciated and respected and also warmly welcomed.”

Meat Management would like to thank the WCB and past Master, Graham Jackman and Liveryman Derek Berry for their help in putting together this obituary.