Opportunities for Scotch Beef and Scotch Lamb in Singapore

Opportunities for Scotch Beef and Scotch Lamb in Singapore

A keen appetite for Scotch Beef PGI and Scotch Lamb PGI was very much in evidence at the Food and Hotel Asia (FHA) event in Singapore. 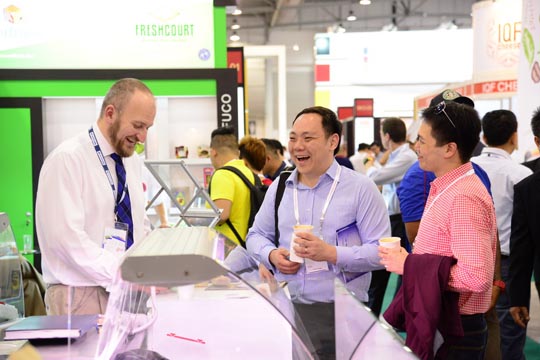 Laurent Vernet, QMS Head of Marketing at the Singapore event.

Quality Meat Scotland (QMS) attended the event – which attracted more than 40,000 trade delegates from the region’s food sector – as part of a Scottish delegation organised by Scotland Development International and Scotland Food & Drink.

Singapore is renowned for its fine dining and eating out culture with more than 6,700 restaurants and food outlets registered in 2012. It also has the third highest per capita income in the world and half of the world’s population is within six hours flight of Singapore.

It is not surprising, therefore, that there is a big demand for high quality, premium food products in both the retails and food service sectors.

Laurent Vernet, QMS head of marketing, said that during the course of the event several significant new opportunities for Scotch Beef and Scotch Lamb were identified.

“Consumers in Singapore are very interested in sourcing food which has strong ethical credentials. They are keen on grass-fed, growth hormone free meat,” said Mr Vernet.

“Singapore offers a real opportunity for us. It is not a big market but it is a lucrative one with real potential for top quality Scotch Beef and Scotch Lamb for both the retail and food service sectors.
“Around 70% of the population of Singapore is Chinese but the majority of these consumers have Western kitchen equipment and choose to eat their meals in a western manner, very often with an Asian twist.”

The Scottish Development International profile at the event followed recent industry figures, which show that between 2006 and 2013, Scottish food and drink exports to Singapore have more than doubled and are now worth over £330 million making it Scotland’s third largest export market.

While Scotch whisky dominates the figures, food exports to Singapore are on the rise, increasing by 20% last year to just over £1.6 million.