Pasties are a favourite in the South West, so it was fitting that a ‘Pork and Apple Pasty’ was crowned Overall Champion at the latest stop on the BPEX Pork Product Excellence Awards tour 2012-2013.

A delighted Tim Potter said: “I really can’t believe it, this is by far the best result we’ve ever had! We are renowned for our pasties, making and selling some 300 to 400 every week, so it was only right that we put them forward for evaluation. We’ve a number of different varieties; including ‘Steak’, ‘Steak and Stilton’ and a new ‘Pork Tikka Pasty’, which also picked up a bronze award. However, the Pork and Apple really hit the spot.

“We started making it a few years ago and have gained silver and gold awards along the way with helpful feedback from the judges. We took it all on board and made a number of improvements for this year’s event; increasing the meat content, soaking the apple pieces in apple juice to really enhance the flavour and using the best glaze to give it a nice pie polish. The result was brilliant and I couldn’t be happier that it was chosen as the Champion product for the South West. 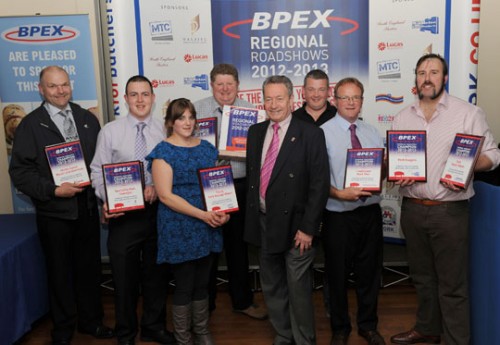 Pork and apple was also a winning combination for Pyne’s of Somerset. Their ‘Pork and Apple Casserole’ and ‘Pork and Apple Burger’ topped the Pork Ready Meal and Pork Burger categories.

Malcolm said: “We’re really pleased, particularly as we’ve not been able to enter the event in recent years due to the expansion of the business. So to come back and claim two champion titles in the first year for the new business is brilliant. We’ve re-located and invested in the prepared meals section so to get such a prestigious accolade for one of our ready meals is great.

“The idea for the dish came about only a month ago when we had some lovely apples in. The kitchen played around with them and the casserole was produced as a result – just tasting it for the first time I knew we were onto a winner, it’s 100% homemade and ideal for the time of year.

“This is a fantastic result and shows that with growth we’ve retained the high standards and personal service of the village butchery. It also highlights our great team of people – not just our staff but farmers that supply us and need support in these tough times.”

Steven Winn, who runs Riverside Butchers in Taunton with his father, was delighted with their 100% success rate – five gold awards for five products entered, plus champion titles in the Black Pudding and Speciality Pork Sausage categories.

Since taking over the shop four years ago they have built an enviable reputation based on providing high quality, locally sourced produce and traditional butchery methods. Steven said: “We’ve had success with our Black Pudding previously so it is good to know that it has stood the test of time. Our ‘Pork, Stilton, Apple and Port Sausage’ is a variety that we’ve been making for less than a year. We’re always thinking of new ideas and the combination of ingredients work perfectly. It’s a full flavoured sausage, ideal for hearty evening meals over the winter months and of course, will be great for Christmas.”

In the Young Sausage Maker category Kimberley Daniels from Artingsalls Family Butchers in Bristol wowed the judges with an ‘Italian Style Sausage’.

The talented young butcher, who has worked in the family shop for four years, came up with the sausage recipe for a customer’s cookery class just a few weeks ago. She said: “I’m thrilled to win the title for the second year running. The sausage is a lovely combination of fennel, chilli and garlic and I was so pleased with the result I just had to put it forward for evaluation. I’m in charge of all sausage making in the shop and love coming up with new recipes to try.”

Kimberley, who also competed in this year’s national ‘Champion of Champions’ event with a ‘Traditional Pork Sausage’, is getting a real taste for competitions. “They’re a great way to improve and the judge’s feedback is really helpful,” she said. “They also inspire me to try new things and I’m already planning on learning how to make our own Black Pudding and cure our own bacon. So watch this space!”

BPEX butchery and product development manager, Keith Fisher, said: “It was great to return to the South West and meet the region’s butchers who did not fail to impress with a very high standard of pork products. Their pride in quality assured and local ingredients was evident, and almost all walked away with an award, almost half of which were gold.” 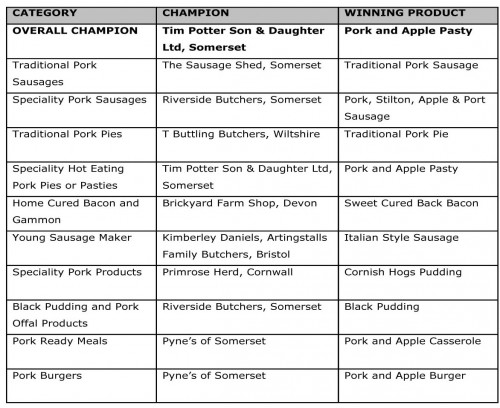 On to the north…

The North West roadshow is next, taking place at the Reebok Stadium, Bolton on Wednesday 31st October. Entry forms and guidelines can be downloaded from http://porkforbutchers.bpex.org.uk.

Butchers are welcome, even if they’re not entering products; it’s free to attend and they get the chance to meet industry experts and suppliers, and pick up new product ideas.