Britain’s pig farmers this week launched a 19 city, nationwide tour, serving up free bacon and sausage sandwiches to thank shoppers for supporting them, as high costs and losses threaten to drive many farms out of business. 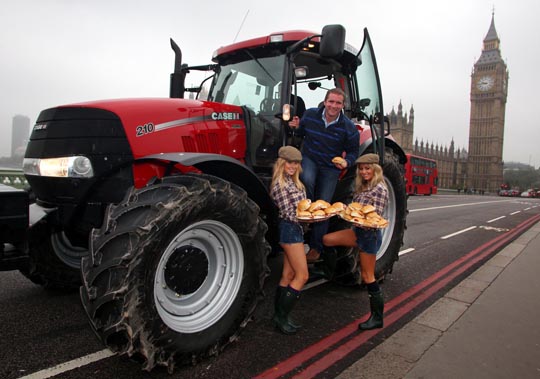 English Rugby Union player Phil Vickery and models Stacey Clarke and Carly Baker travel around London, to hand out bacon sandwiches as a thank-you to the British public for supporting British farmers.

Pig farmers have seen their production costs soar as droughts and crop failures around the world have driven up the price of feed and currently face losses of £12 per pig. This means retail prices for pork, bacon, sausages and ham, like many foods, are likely to increase over the coming weeks.

“All the indications are that pork, bacon and sausages, like other foods will go up in price over the coming months. We wanted to say a big thanks to shoppers in advance for sticking with us. Giving out free bacon and sausages sandwiches seemed like the natural way to do it,” said Richard Longthorp, chairman of the National Pig Association.

“We really appreciate the support from the public especially as we know a lot of people are feeling the pinch at the moment. All we are asking people to do is stick with us and keep buying Red Tractor, pork, bacon, sausages and ham and we’ll stick with them and keep producing the high quality pork we all love.”

Speaking at the launch Phil Vickery said: “As a farmer’s son I’ve always been supportive of countryside issues and as a keen cook I’m really passionate about quality ingredients. We produce some of the best pork in the world in this country but our pig farmers are struggling due to high costs. It’s great to see that the public are prepared to support farmers and that the majority say they are happy to pay a little bit more for pork, bacon and ham, produced responsibly by Red Tractor farmers.”