British Sausage Week got off to a superb start on Friday with its very own pop-up shop set up in London’s Old Spitalfields Market, to mark the launch of this year’s celebratory Week (4th-10th November). 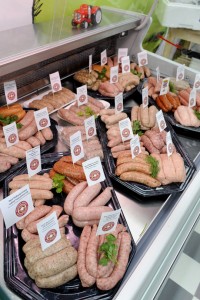 Sausage pop up shop in the heart of Spitalfields.

For one day only, the shop was filled with more than 100 quality pork sausages, all of which were regional winners in the ‘Discovering Britain’s Greatest Sausages’ competition.
Samples cooked by Ladies in Pigs (LIPS) members were handed out for people to taste and this year’s British Sausage Week ambassador, celebrity chef Simon Rimmer, visited the shop to get the sausage celebrations underway. 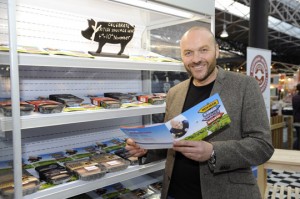 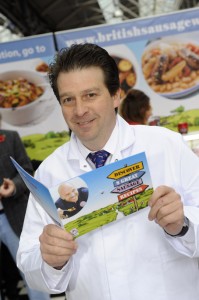 Simon was joined by Sausage Sommelier, Shaun Vining, who was on hand to give out tips on how to spot quality pork sausages. Having competed in one of the industry’s most prestigious competitions Champion of Champions four times, Shaun knows a thing or two about quality sausages. The Devon based butcher said: ‘It’s great to be involved with British Sausage Week this year and to have the opportunity to help promote the quality and diversity of sausages made in this country.”

BPEX product and butchery development manager, Keith Fisher, said: “The pop-up shop attracted large crowds throughout the day so it was an excellent way to kick-start this year’s British Sausage Week celebrations. With more than 500 varieties available in Britain, the shop provided the perfect platform to showcase just some of the many quality pork sausages available across the country.”

With British Sausage Week now officially underway, Simon Rimmer is travelling across the country on a nationwide tour to discover more of Britain’s best sausages. He said: “I am thrilled to be undertaking this journey of discovery to find Britain’s greatest sausages. As a chef, I know that sausages can be one of the best value meals to feed a family and when you choose those with a Red Tractor pork logo on pack you’re not only supporting responsible pig farmers but ensuring the sausages you eat are produced to exacting standards too.”