The British poultry industry celebrated outstanding achievements and potential for excellence during the British Poultry Council Annual Awards at the House of Commons. 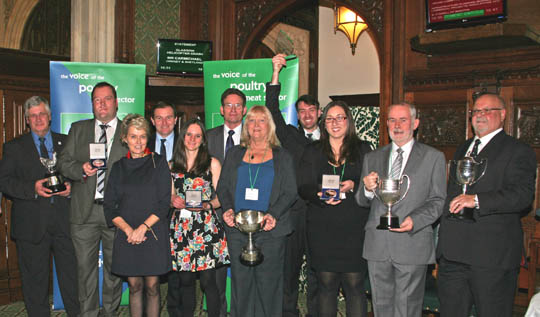 The winners of the 2013 British Poultry Council Awards.

Food and Farming Minister George Eustice MP and BPC Chairman John Reed presented the awards, highlighting the unique contributions of each winner to the poultry industry.

Farming Minister George Eustice said: “The poultry sector is a thriving part of the UK’s £96 billion agri-food industry. I strongly support BPC’s efforts to attract new talent and this year’s winners represent the wide ranging skills of the industry. Whether experienced specialists or newcomers to poultry farming, all winners have shown dedication and passion for their work.”

The BPC Awards recognise years of distinguished service, contribution to marketing, potential for future excellence and support for the wider industry (see full list below).

BPC Chairman John Reed highlighted the key role of the British poultry industry in career and skill development: “As an industry, we aim to attract, recruit, train, develop and retain quality people. The poultry industry is a significant force in the labour market and a first-rate employer. We already have successful training and scholarship programmes through the British Poultry Training initiative. Now, we need to focus on young people and make sure they understand that there are real prospects in the industry for them.”