Premier Young Butcher 2015 Lucy Crawshaw and competition runner up Joe Smith are off to learn cutting edge techniques at the SVO specialist Butchery training school in Best, Holland, this week. 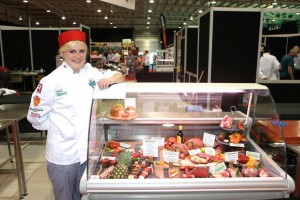 The pair are taking the butchery lessons in preparation for the International Young Butcher Competition at IFFA in Frankfurt, Germany, which is taking place in May.

The trip to the school in Holland is supported by the Worshipful Company of Butchers (WCB).

Lucy and Joe are training hard in the run up to the IFFA contest. They are being helped by UK team coach Viv Harvey, international jury member Keith Fisher and Dutch ‘Orange Butcher’ Marco Peerdeman who was a winner at IFFA in 1996.

UK team manager and chief executive of the National Federation of Meat and Food Traders (NFMFT) Roger Kelsey said: “The competition is as much about innovation and precision in producing continental type barbecue and kitchen ready products as it is about seam butchery and appreciation for charcuterie, which have always been a challenge for UK contestants.

“Hopefully, this additional resource will help Lucy and Joe to redress the balance in Frankfurt in May. Full marks to the WCB for making this happen.”

Lucy, from Taylors Farm Shop in Lathom, Lancashire, and Joe of Lishman’s of Ilkley in Yorkshire, will compete against other apprentices from Austria, France, Germany, Holland and Switzerland at IFFA.

There will be six categories to test their skills and knowledge of seam butchery, and their ability to produce ready-to-eat barbecue and kitchen-ready products during two days of intense competition.

Lucy, already celebrating success at London’s Meatopia event last September, will also be joining Joe in demonstrating their skills at an apprenticeship fair at London’s Guildhall in March.

They will also be taking part in a Master Class at Foodex in April before final preparations for Frankfurt.