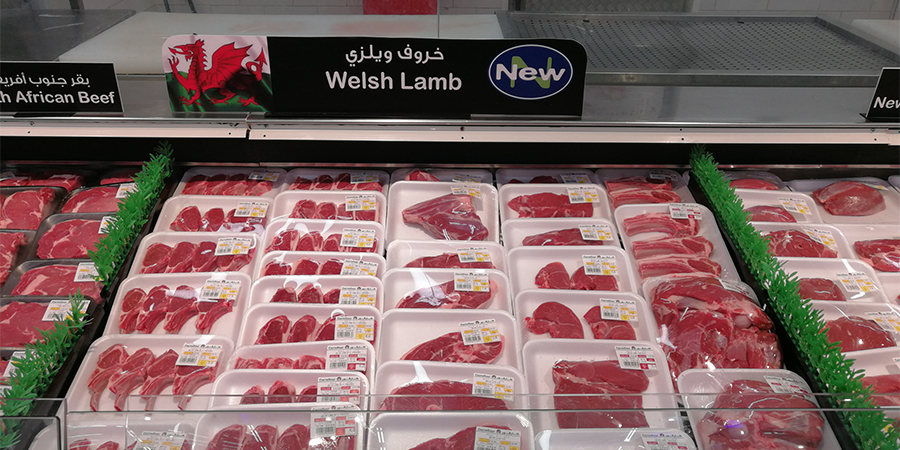 Welsh Lamb on sale at a supermarket in Qatar.

While Europe is still the destination for the large majority of Welsh Lamb exports, HMRC trade figures for January to October of 2019 show a leap of 608% in the tonnage of lamb exported from the UK to the Middle East when compared with the same period last year.

The sheepmeat trade to the region is estimated to have been worth around £2 million to Wales already this year, with figures for the final two months of 2019 still to be confirmed.

Exports to the United Arab Emirates have increased five-fold compared to two years ago, trade with Jordan and Kuwait has been established, and the gulf state of Qatar has been added as a brand new export destination for PGI Welsh Lamb within the past few months.

A number of Welsh processors are leading the drive to increase trade in the Middle East, in partnership with HCC and the Welsh Government. Thanks to contacts made at recent trade development missions, PGI Welsh Lamb is now available in two major supermarket chains in Qatar.

The region has been the focus of long-term promotional work by HCC. Welsh Lamb has earned its place in the high-end retail and hospitality sectors in the UAE for a decade, and has gained wider recognition through promotions at the annual regional Gulfood trade show in Dubai. This market development activity has been intensified since 2016 as the industry prepares for Brexit, helped by additional funding from Welsh Government’s Enhanced Export Fund.

“These countries are large consumers of lamb, and are increasingly prosperous with growing retail and tourism sectors”

According to HCC’s market development manager, Rhys Llywelyn, hard work over a number of years is now paying dividends.

“The Middle East has been identified as a promising export destination by HCC for some time,” said Rhys. “It’s still much smaller than our European markets, but at the current rate of growth, trade to countries such as Qatar, Jordan and the UAE could have a real positive influence on returns for Welsh farmers and processors over the next few years.”

He added, “These countries are large consumers of lamb, and are increasingly prosperous with growing retail and tourism sectors. They depend greatly on imported food, and are appreciative of high-quality, traceable meat from Wales.”

Minister for Environment, Energy and Rural Affairs, Lesley Griffiths, said: “It is heartening to see Welsh Lamb doing so well in new markets, as it shows the positive impact of efforts to promote it and the benefits of trade development missions.

“We are determined to support Welsh farmers in every way we can, helping them build relationships with businesses in every part of the supply chain, and ensure they have the ability to export their produce around the world.”

Expanding the trade to new countries in the region has been helped by work to lift restrictions on UK red meat exports, co-ordinated by the UK Export Certification Partnership (UKECP) and a joint presence at trade shows, part-funded from the £2 million fund of AHDB red meat levies ring-fenced for collaborative projects which is managed by the three GB meat levy bodies – AHDB, HCC and QMS – as an interim arrangement while a long-term solution is sought on the issue of levies being collected at point of slaughter in England, for animals which have been reared in Scotland or Wales.