A nationwide search is underway to find the most original, creative and inspirational recipe for a ‘Commonwealth Burger’ and S1 – S3 secondary school pupils from throughout Scotland are being urged to get their entries in.

In this landmark year for Scotland, with the Commonwealth Games just around the corner, Quality Meat Scotland (QMS) is giving Scottish schools the chance to show off their Budding young chefs in secondary schools have been challenged to use fresh local ingredients, including Scotch Beef PGI, Scotch Lamb PGI or Specially Selected Pork, to create their mouth-watering masterpiece in this Scotch Butchers Club initiative. 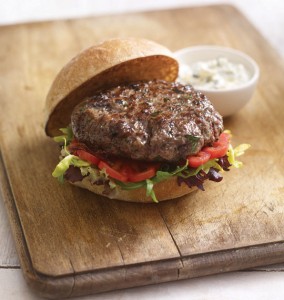 Entering the award is very simple – all pupils have to do is write down an ingredient suggestion for the burger, along with a brief explanation of the thought process behind their ingredient selection. Short-listed entrants will then have the opportunity to develop their concept with some product development supported by their local Scotch Butchers Club butcher.

Three finalists will go forward to take part in a grand finale at this year’s Royal Highland Show where the burgers they have developed will be cooked and sampled by a panel of expert judges.

The overall winning “Commonwealth Burger” recipe will be shared with Scotch Butchers Club butchers across the country who will have the opportunity to showcase it in their shops in the run up to the Games. The successful school will receive a £250 voucher to spend on tasty Scotch Beef, Scotch Lamb and Specially Selected Pork and the winning pupils will receive a selection of goodies, including iPod shuffles along with exclusive t-shirts. There will also be runner-up prizes.

Jennifer Robertson, Health and Education Coordinator, at QMS said: “This is a fantastic way to inspire pupils to get involved in the excitement around the Commonwealth Games and build their awareness of the importance of cooking healthy meals from scratch. To have their winning recipe available for sale in butchers the length and breadth of the country is such an incredible opportunity for our budding young chefs in schools around the country.”

For more information and to be sent an entry form please contact Jennifer Robertson, Health and Education Coordinator, Quality Meat Scotland on 0131 472 4041 jrobertson@qmscotland.co.uk . Entries must be received by May 19th.ce to show off their aspiring young chefs by challenging them to devise the perfect Commonwealth Burger.