Some of the UK’s top butchers were on sizzling form at the Q Guild National BBQ Finals held recently in Oxford.

The competition, held at the Weber Grill Academy, pitched the winners of seven regional finals against each other to find the best sausage, burgers and steak.

The sausage category included entries varying from traditional pork to beef, caramelised onion, tomato and horseradish, but top prize went to Cranstons in Penrith with its Traditional Cumberland sausage.

Rob Macmanus of Cranstons said: “It is great to win, especially when there were so many excellent businesses here. It shows we are doing something right and makes it all worthwhile.” 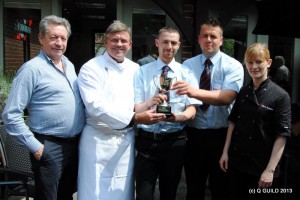 A beef burger blended with gruyère and edged with mixed spices earned Walter Smith of Albrighton the runners-up spot, but the Welsh beefburger made by Martin Player of Cardiff was the ultimate winner.

Martin said: “It is just a simple burger, but is made from premium Welsh beef that has been hanging for a few weeks and comes from a really good source.” 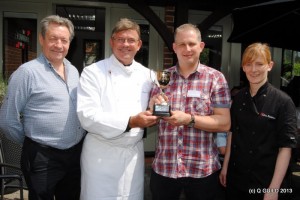 Martin Player butchers (3rd from left) is presented with his Burger Trophy from the judges.

In the steak final entrants did their own cooking for tasting by a panel of judges, including chef Jeremy R Fowler and master butcher Keith Fisher.

The steak category was the most hard fought, with a tie-break for first and second place forcing judges to give the top prize to the steak that scored highest on taste. The winner, by just one point, was Robinsons of Tettenhall, Wolverhampton for its sirloin steak. In very close second was a ribeye steak from Hepburns of Mountnessing, and Martin Player claimed another prize by taking third place for his Welsh ribeye steak.

“I didn’t come here thinking I would have to cook the steak myself, but actually it was great to be able to do that,” said Tom Robinson, who is a trained chef.

He added: “It is great to win. It wasn’t something we prepared especially for the competition, but something we sell every day in our shop.” 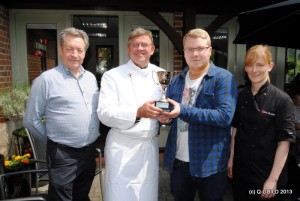 Robinsons were winners of the Best Steak Trophy.

The finalists were also treated to a BBQ Masterclass from the Weber Grill Academy team, learning how to prepare and cook perfect Weber ribs, beer can chicken, pork kebabs and black cherry smoked lamb.